From his media interview today, per Teresa Varley at Steelers.com: 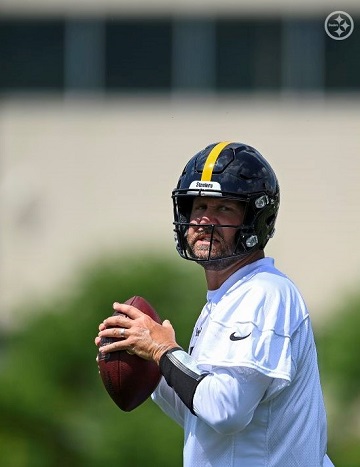 This year is the first time that Fitzpatrick has taken part in OTAs with his Steelers teammates. He missed them his first year in black and gold because he was traded early in the season, and in 2020 there weren’t OTAs. So, this year he is taking advantage of everything and using them to get ready for 2021.

And speaking of that, a perfect example he gave after Tuesday’s OTAs was Ben Roethlisberger. Fitzpatrick had the luxury of working against Roethlisberger on Tuesday because the veteran quarterback, in his 18th season, has been taking part in voluntary OTAs on a regular basis, something that is benefiting everyone on the field and giving the secondary some good looks to prepare for.

“I am happy Ben is out here,” said Fitzpatrick. “He has been doing this a while. He doesn’t have to be out here competing against us. He chooses to come out and compete. When he is out there everyone gets better.

“It’s a great look for me. Not too many quarterbacks can do the things he does. The very first play he held me in the field a little bit and made a throw backside. Not too many guys are doing that across the league. Me going up against that, I get to go back and watch film, or on the field say I could have done this better, remind myself of the fundamentals when I go against a guy like Ben. This year we are going against a lot of guys that are high caliber. Him coming out here, I respect it, appreciate it. We are going to see some great looks. Everybody gets better when Ben is out there.”


You can read more from Minka Fitzpatrick’s interview here.