Cindy Dupray and Anita Doddroe took their cameras along to capture the action as their children and grandchildren participated in The 2011 Ben Roethlisberger Football Camp at Seneca Valley High School in Harmony, PA this week. 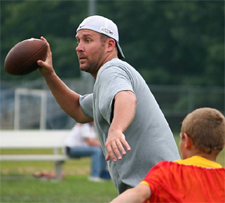 “The Ben Roethlisberger Football Camp was a great success! It was wonderful! The kids all had a great time. My grandsons loved it and can’t wait to go back! Ben was wonderful with the kids…such an encouraging person! I had to laugh at one point when Ben was playing with some of the younger campers during a 7 on 7 drill. All the kids were yelling “Ben, Ben, Ben” wanting him to throw them the ball. They reminded me of little baby birds all trying to get the mother bird to feed them! What a hoot!

“What a great surprise, also, to have so many Steelers come to the camp during both days! We had Emmanuel Sanders, Trai Essex, Willie Colon, Charlie Batch, Mike Tomlin, Tyler Grisham and Brett Keisel! They all joined in either speaking to the kids or participating in the drill sessions and 7 on 7 games. I can’t believe camp time has come and gone but the kids have great memories now!”


You can see both Anita’s and Cindy’s photos here (three pages of ’em).


*Ladies, thank you so much!

– Video from the Cranberry Patch, “Girls and Boys Swarm to Roethlisberger’s Football Camp”

– Video from the Pittsburgh Tribune-Review, “Ben Roethlisberger talks at camp”