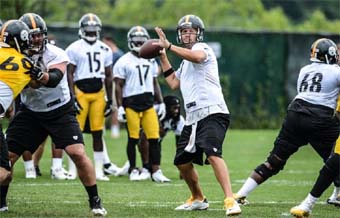 It wasn’t long after former Steelers wide receiver Emmanuel Sanders arrived in Denver last year that he said Peyton Manning was much more of a leader than Ben Roethlisberger.

This Roethlisberger gathers a group of his teammates to work out in Georgia during the spring.

This Roethlisberger grabs quarterback coach Randy Fichtner before practice because he wants work on a couple of throws that he doesn’t quite feel comfortable with yet.

This Roethlisberger not only attends every voluntary organized team activity, he routinely stays after practice with his receivers to get in extra throws.

And more noticeably now than in his 11 previous seasons, Roethlisberger is more than just a quarterback during practice — he’s being a coach, as well.

“It’s fun because I can tell the guys what I want on the field and they are going to listen because we all want to be the best we can be and help each other win,” Roethlisberger said. “I am just happy to have the coach’s blessing to be able to do that and not stepping on anybody’s toes.”

It’s a natural progression for Roethlisberger to step into a more hands-on approach with the offense.

“Man, that comes with being him,” Steelers coach Mike Tomlin said. “It’s evolved over the nine years I have been with him and it should. It is a natural maturation process. Not only in terms of what he is doing but understanding the scheme and approach we are taking offensively.”

Roethlisberger never seems to pass up a teaching point when it arises, especially during the past five weeks of spring practices.

“He is really coaching them up,” backup quarterback Bruce Gradkowski said. “The most important thing about the quarterback position is having guys do things the way you want them done. I see him doing that more and more. Guys listen when he talks and that’s huge.”