From Mike Prisuta today at Steelers.com: 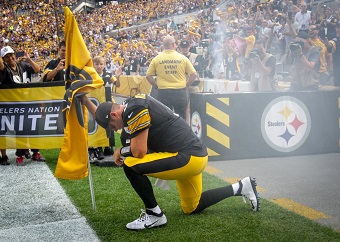 It’s not often that perhaps the most emotional and most memorable moment of a game occurs prior to the opening kickoff.

But the Steelers’ hosting of Minnesota on Sunday afternoon at Heinz Field wasn’t just another game.

The Steelers paid tribute to Dan Rooney prior to the home opener, and the ceremony and celebration included quarterback Ben Roethlisberger sprinting from the tunnel as the offense was being introduced carrying a flag bearing Rooney’s initials, “D.M.R.”

Roethlisberger eventually passed the flag to linebacker James Harrison, who waved it in front of the crowd.

“Mike Marchinsky (of the Steelers’ marketing department) bought it to my attention early in the week, said we might do it, would you be OK with it?” Roethlisberger explained. “I said absolutely, and then it kinda got nixed for some reason later in the week. And then on Saturday morning I went to Thomas Tull (of the Steelers ownership group) and told him, ‘Hey, we gotta talk to Mr. (Art) Rooney (II) about this because it’s too important not to do it.’

“I think Art was just nervous that it would be a burden to me or to whoever carried it. I was like, absolutely not, it would be an honor to honor him. And it just was, I think, very appropriate.”

Rooney passed away on April 13.

“He was a father, a grandfather figure to everybody,” Roethlisberger said. “He treated everybody the same. It didn’t matter who you were, where you came from, what you did, everybody was important to him. Always had time to shake your hand, look at you, talk to you.

“And obviously, he drafted me, took a chance on me. I know he went into that draft room and said, ‘We’re not passing him up,’ and so I wouldn’t have been here if it wasn’t for him. Just a lotta love for him and the family.”