Home/News/Ron Cook: Ben Roethlisberger at peace in retirement as training camp goes on without him
Previous Next

“I did it for a long time. I know doing it for a long time doesn’t mean that you get in, but, again, you look at the wins and losses. I think I did it at a high enough level for a long enough time that I think it would be pretty cool to get in. It is a special thing. That is one special place and a special accomplishment.” — Ben.

From Mr. Cook’s interview with Big Ben this week: 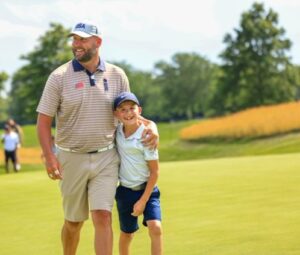 Benjamin Jr. and Bodie had been dropped off at golf camp earlier in the morning. Baylee still needed a ride to swimming lessons. You don’t want to know their schedule for the weekend. If you have kids or had kids, you understand.

“These days, I’m doing a lot of driving,” Ben Roethlisberger said. “I’m a cab driver, an Uber driver, whatever you want to call it. It’s not a good time to have high gas prices.”

Roethlisberger loves every minute of it, doing all the dad things he couldn’t always do when he had a rather time-consuming job as, you know, the Steelers quarterback.

“There’s something about teaching them or doing it with them or just watching them do it that makes it so much neater, more special,” he said Wednesday morning. “A lot of times now, I forget that I even played. I’m having so much fun with them.”

The Steelers will open training camp Tuesday without Roethlisberger for the first time in 18 years. Like just about everybody else in Pittsburgh, he’s eager to see who is going to replace him. He had a relationship with Mitch Trubisky before the Steelers signed him as a free agent in March. The two had the same agent. Roethlisberger started a relationship with Kenny Pickett by calling him right after the Steelers made him their No. 1 draft choice in April. He knows all about what it’s like to be a No. 1 pick, trying to replace a Hall of Fame-caliber quarterback in Pittsburgh.

“I congratulated him and told him he doesn’t need to be me,” Roethlisberger said. “People are going to want to compare us. Even though there was a lot of distance between Terry [Bradshaw] and me, people still compared us. That’s why I told [Pickett], ‘You don’t have to be me. Don’t be me, as a matter of fact. Go be you. Be the best version of yourself and go out there and have fun and play.’”

Roethlisberger offered similar advice to Trubisky when he welcomed him and his wife, Hillary, into his home for dinner before the Trubiskys had their first child, Hudson, in May. He gave Trubisky a few tips on fatherhood and a few more on being the Steelers quarterback.

“You don’t have to go out and be special.”

“It was the same when I came in,” Roethlisberger said. “I didn’t have to be special. There were times we did special things, but we had such a great defense. We had Jerome [Bettis]. We had a veteran line.”

“You don’t have to be a superstar. They’ve got a great defense here. The fact is you’re probably not going to have to go out and win too many games on your shoulders. Just let it come to you and play the game the way it unfolds.”

The Steelers should be so fortunate to have Trubisky and/or Pickett have the same first season that Roethlisberger did. The team went 13-0 during the regular season with him as a rookie starter in 2004 and made it to the AFC championship game.

The Steelers should be so fortunate to have Trubisky or Pickett have a career that even remotely resembles Roethlisberger’s. The team went 165-81-1 with him as the starter in the regular season, won two Super Bowls and played in a third.

“Never having a losing season,” Roethlisberger replied immediately when asked what makes him most proud. “Obviously, the Super Bowls were awesome. I love being able to win two championships for this city. 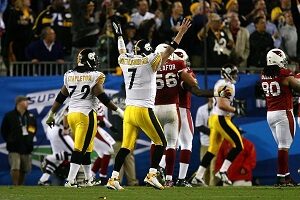 “For me to have the record that I had — that we had — and to never have a losing season in 18 seasons, that should go down as one of the greatest accomplishments. It means so much to me that I won football games.”

“My last game at Heinz Field. That game was so incredibly special. That night was special. The fans. My family. The Browns. Monday night football. It couldn’t have been a sweeter way for me to go out.”

There were a few.

One was the loss to Green Bay in Super Bowl XLV after the 2010 season.

“That was tough. It still stings. We lost [Maurkice Pouncey] right before that game. I still think, ‘What if? What if he’s able to play?’ He was such a different playmaker for us. I look back at it and think, man.

“I know some Packers. I have talked to them. We were starting to make a little bit of a run, driving down the field. They were nervous. A couple of guys were like, ‘Here they go.’ It would have been fun to see what would have happened.”

Another big regret was the fact the Steelers won just three playoff games since that 2010 run to the Super Bowl.

“I feel like the game has changed. I feel like the people have changed in a sense. Maybe it’s because I got spoiled when I came in. The team was so important. It was all about the team. Now, it’s about me and this, that and the other.

“I might be standing on a soapbox a little bit, but that’s my biggest takeaway from when I started to the end. It turned from a team-first to a me-type attitude. It was hard. It’s hard for these young guys, too. Social media. They’re treated so well in college. Now, this new NIL stuff, which is unbelievable. They’re treated so special. They’re coddled at a young age because college coaches need them to win, too. I know coach [Terry] Hoeppner never coddled me [at Miami of Ohio]. Neither did Cowher.”

Roethlisberger said he is at peace with his retirement, although he didn’t feel a lot of love from management before his final season last year.

“It was mostly Kevin [Colbert]. He was ready to move on. I think Mike [Tomlin] was a little ready to move on, but I think he was OK with me coming back. I think Mr. [Art] Rooney really wanted me to come back last year to play.

“I thought I went out on my terms. I never wanted to stay too long. I know some people might think I did. ‘You stayed last year.’ But I thought I played pretty well last year, to be honest. My arm feels like I still could go out and play. I’m pretty confident I could still play. But it’s every day. It’s mental. Not having to prepare for camp and the season has been the biggest blessing for me. I’m fine with where I’m at with everything.” 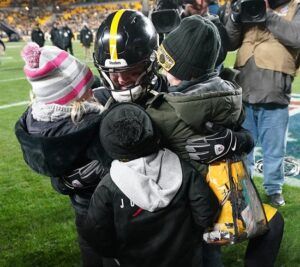 Roethlisberger said he will watch the Steelers games this season, preferably from his couch.

“But the boys already have said to me, ‘Dad, we’re going to every game, right?’ I’m thinking that’s one battle I might lose.”

Roethlisberger is glad his kids were old enough to see and remember his final game at Heinz Field. Ben Jr. is 9, Baylee, 8, and Bodie, 6. He is looking forward to having them and wife, Ashley, with him when he is inducted into the Pro Football Hall of Fame.

“I did it for a long time,” Roethlisberger said of his career. “I know doing it for a long time doesn’t mean that you get in, but, again, you look at the wins and losses. I think I did it at a high enough level for a long enough time that I think it would be pretty cool to get in. It is a special thing. That is one special place and a special accomplishment.”

Roethlisberger’s first year of Hall of Fame eligibility is 2027. That will get here soon enough. In the meantime, his schedule is pretty full.

“I’m off to get the boys at golf,” he said, sounding very much like a man who can’t wait to see what the rest of the day brings.