That’s what Darren Dunlap was….in fact, she was a ROCK STAR at Steelers training camp!!

For the past nine months, life has been anything but normal for six-year old Darran Dunlap.

During a time when little girls should be going to school, playing and having fun with their friends, she has been bravely battling leukemia. She has stared down chemotherapy, and decided she is stronger than its vicious side effects. She has dealt with hospital stays in an adventurous manner, always with a smile on her face.

Cancer, leukemia, chemotherapy, shots, hospital stays, none of them have broken the spirit of this little champion, who has stolen the heart of many who have been following her brave journey through the stories and photos shared by her father, Colin Dunlap, a sports talk show host on 93.7 The Fan in Pittsburgh.

On November 7, 2016, Dunlap and his wife Raina, got the news no parent ever wants to get. Their daughter, who has a twin brother Declan, has leukemia.

She began chemotherapy the next day, spending nine days in the hospital and too many more to count since then. 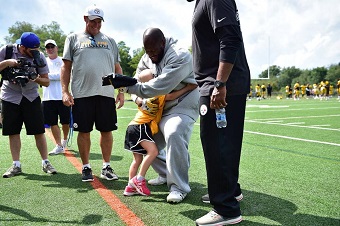 “Every day since then we have been beholden to a thermometer, a reading, or a test to see if not just could she go outside, but does she need to go to the hospital,” said Colin Dunlap. “This is our new normal. There were days I was thinking about my daughter’s mortality, let alone my daughter going outside, or running, or next step being around a crowd. I have seen her lay in a hospital bed get a one inch needle put into her chest and her become accustomed to it. It means a lot to see the growth.”

There is good news. She is now in the maintenance phase of her treatment, meaning that after month after month of not being permitted to be around crowds, she is finally able to go out and do the things kids love to do. She can go to parks, to the grocery store with mom, and out to dinner. She will still be monitored, going to the hospital monthly and not being cleared until March, 2019, but some normalcy has returned to her life.

And on Friday, she did something the little sports fan loves. She came to Steelers training camp as a special guest of Coach Mike Tomlin and the team.

“We got a letter from Mike Tomlin one day, it came in the mail,” explained Dunlap. “It was unsolicited. It was from the heart. He told us we rally behind you. The city has. Would love you to be our guest for Friday Night Lights in Latrobe. It floored us. It wasn’t something you could fake. It was a personal invitation from Mike.”

When that day arrived, Aug. 4, Darren wasn’t cleared by her doctors to be in that type of setting. Tomlin said no problem, and offered the opportunity for her to come whenever she wanted. 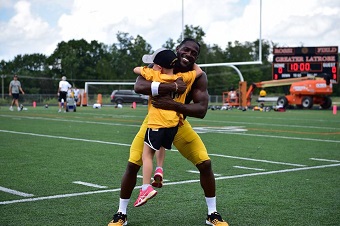 “She jumped up and down and was excited she was going to practice,” said Dunlap. “I understand what the Steeler logo means, what Steelers letterhead means. I get what it means for him to reach out and what the organization means. Anything with Mike Tomlin’s name or emanates from something owned by the Rooney family is big in this town.

“She is a big Steelers fan. She has gotten to the point with football where she wants to run plays in the front yard. She is intrigued by football because it’s that many people participating at once. That caught her eye, how much action is happening. She just thought I get to go and see those guys close up. That was real exciting to her.”

That it was. She was on the sidelines during practice, right alongside the players, enjoying every minute.


You can read more & see some great photos from Darran’s day at camp right here!