Home/News/“Thank you so much Ben!”
Previous Next 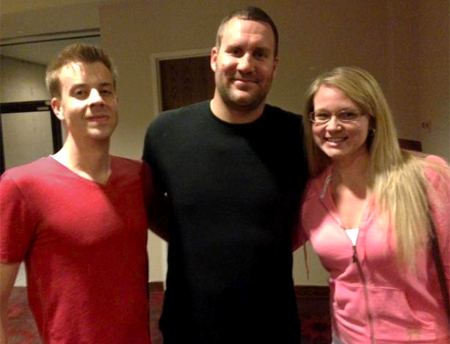 My wife, Alexis and I were driving home from Florida after visiting her parents for the holidays and we ended up staying at the Hyatt Regency in Louisville, Kentucky. It was funny because it was probably a 1 in 30 chance that we ended up at that hotel because we used Priceline to book it so we didn’t get to choose where we stayed.

We were up in our room and looking on the Facebook page when we realized Big Ben, Brett Keisel, and Merril Hodge were in the area at the ATA Show. We decided to get dressed and walk around the hotel a bit, never thinking we would run into them. We walked down to the lobby and literally two minutes later Big Ben walked in the front door.

Being huge Steelers fans for 25 years, my wife and I were totally stoked! I called out to him that I would love to get a picture with him and he hollered over to me, “Let’s do it”!

We were so excited that night we could hardly sleep. Thank you so much Ben for stopping for us to get a picture, and to make such an awesome memory.

Congratulations to you and your wife on having Ben Junior and much luck next year. Hopefully you can bring home Number Seven! — Tom Keen


*Thank you for sharing the photo and story, Tom!!

We’ve added more fan photos to the gallery. There are a few new Lil’ Fans, Big fans – including one from Steeler Nation Down Under, and even some furry fans!


You are welcome to submit your photos and fan stories to us at BigBen7website@gmail.com!