A Bellevue police dog, Ozzy, gets a custom-fitted bulletproof vest courtesy of the Ben Roethlisberger Foundation.

From Lynn Thompson at the Seattle Times:

Last week, when two mail-theft suspects ditched a stolen car and ran from police, one of Bellevue’s newest officers was called to track them down.

In nine months on the job, K-9 officer Ozzy has apprehended 11 suspects.

The 95-pound German shepherd was at Bellevue City Hall on Thursday, showing off his new Kevlar, bullet-resistant vest, before an admiring crowd of city employees and media. 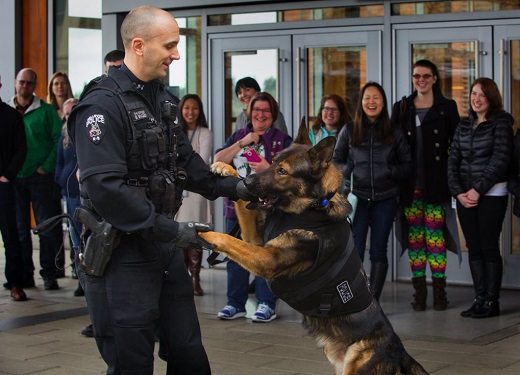 Ozzy was the only one of three Bellevue police dogs without a protective vest. Lt. Andrew Popochock, who supervises the K-9 unit for the Bellevue Police Department, said that the dogs often are sent into high-risk situations with suspects armed with knives or guns. They also train with Bellevue’s SWAT team.

“Just like we want protection for our officers, dogs need protection as well,” he said. Ozzy’s vest was constructed of the same materials as police protective vests and was custom-fit to the dog.

Straps and buckles keep the vest secure, but still allow for movement. Ozzy had to reach 2 years old before it could be certain he wouldn’t outgrow the vest.

Popochock said police dogs and their handlers receive more than 400 hours of training, learning obedience, bite work, tracking, locating evidence and how to tell which scent is fresh at a crime scene.

The $2,400 vest was purchased with a grant from the Ben Roethlisberger Foundation and the Bellevue Police Foundation. Roethlisberger is well-known to Seahawks fans as the quarterback for the Pittsburgh Steelers who dashed Seattle’s first Super Bowl bid in 2006.

Last November, a few days before the Seahawks-Steelers game, the foundation announced awards to the Bellevue and Renton K-9 units.

“Ben is a big dog fan,” Popochock said. ”He’s done a lot of good in communities around the country and a lot of good for police dogs.” As far as the Super Bowl loss in 2006, he said, “We’re over that.”