“I owe him everything, being here, being a Steeler, winning Super Bowls, to my family; I mean I wouldn’t have my wife and kids if it wasn’t for him. Literally, I had tears in my eyes during the National Anthem with the symphony.” — on the impact Mr. Dan Rooney has had on his life.

Ben joined the Cook and Poni Show today for his regular weekly appearance on the #1 Cochran Ben Roethlisberger Show to talk about the Steelers (2-0) start and looking ahead to next Sunday in Chicago. 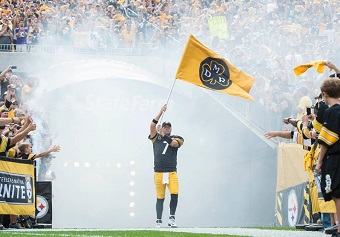 But before looking to this next week, he first reflected on the opportunity to honor Dan Rooney back carrying a “DMR” flag on Sunday and how much he means to him.

“It meant the world,” said Roethlisberger. “To come out, to wave that flag, take a little knee, say a little prayer, to really honor him. After the game, same thing, giving the game ball to Art [Rooney II], just saying that some of those guys, some of the young guys that are here, obviously don’t know this, but other than when he was in Ireland being the ambassador, this is probably the first home game he’s missed in like 70 years. But, like I said, in the locker room, he had the best seat in the house and this one was for him. So I gave the ball to Art, and he said he was going to give it to his mother, it was very emotional.”

Roethlisberger and the Steelers offense had a better show in Week 2 as he finished the day with 23 completions on 35 pass attempts for 243 yards and 2 touchdowns. Roethisberger has a lot of weapons to choose from, but he can’t get caught up in trying to please.

“I take notice a little bit of, ‘OK, who’s maybe not getting the ball, who needs to get it, who’s not happy right now, and I’ll maybe try and get him a play or call a play in the no-huddle to give them the ball to keep everyone happy,” said Roethlisberger. “But I can’t let it affect my play-calling or forcing balls. In the past, I’ve done that where I’ve tried to keep guys happy and it creates a bad issue, whether it’s a turnover or a bad play because someone else was open because I’m trying to force it. So, at the end of the day, if it’s going to hurt the team I just kind of say, ‘You’re going to have to just deal with it’ and winning is more important and they can be mad at me all they want but they better realize that if we won the game that that’s all that matters.”

Both Roethlisberger and Tomlin were confused by the play clock running down before the two-point conversion attempt after the first touchdown on Sunday. Ben says that there has been a slight rule change that caught the Steelers off-guard. 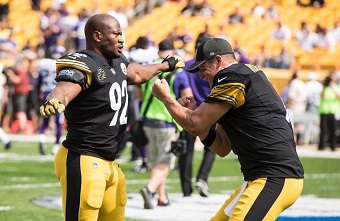 As soon as a touchdown is scored, the 40-second play clock starts. At 20 seconds, the clock stops for a few seconds so the officials can review the play. Once they do that and everything checks out, the clock starts rolling again right after. Roethlisberger looked twice at the clock when it was paused at 20 seconds and assumed the play clock would remain there until the ball was placed for the two-point attempt. He says that they have learned from their mistake.

On the other side of the ball, both he and James Harrison were baffled as to why Harrison did not see the field on Sunday.

“I talked to him yesterday, I just kind of asked like, ‘What’s going on? What happened?’ He just gave me this look like, ‘I have no clue.’ So we talked a little bit about it, but there’s no real answers. He didn’t have any answers for me. I don’t know if he has any answers. I was kind of confused by it, I’m not really sure what the reasoning was on it,” said Roethlisberger.


You can listen to his full show here.