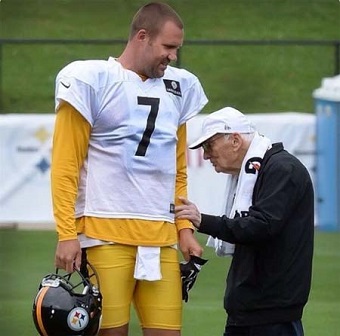 Outside of his faith and family, Dan Rooney had a passion for two other things…his beloved Steelers and equally beloved Ireland.

When the late Chairman of the Steelers passed away last April, many wore shamrocks with the Steelers logo to honor his memory, and his love for those cherished things.

This season, Steelers’ players will do something similar.

Throughout the regular season players will sport a patch on the right side of their jerseys with Rooney’s initial’s DMR, which stands for Daniel Milton Rooney, lovingly enveloped in a black and gold shamrock to honor, remember and show love and respect for the man who was more than an owner, but family to the players.

“We wanted to have something my dad would be proud of and really called out parts of his life that were important to him,” said Steelers’ President Art Rooney II. “The shamrock is something he would be happy about.

“I know he wouldn’t want us to make too much of a fuss. I think wearing a jersey patch, he would be proud of that. It’s a great way for all of us to remember what he meant to each one of us and what he meant to the organization.”

What he meant to the players, to the ones who will wear the patch, was simply the world.


“Today we lost a great one! I wouldn’t be a Steeler if it wasn’t for Mr. Rooney! We will miss you dearly! Love you DMR!” — Ben, from his tribute to Mr. Rooney on April 13th.

“It’s going to mean so much to wear it,” said Maurkice Pouncey. “For me personally, I was really close to him. He was an excellent guy, a great person to be around. He knew everybody. He was really respected. I hope we can honor him as much as possible. It would mean a lot to all of us players and Steelers Nation.”

This isn’t the first time the team wore a patch on their jerseys in memory of an individual. It was previously done for Arthur J. Rooney Sr., ‘The Chief,’ when players wore the AJR patch in 1988 after he passed that August.

The Steelers, as well as all NFL teams, wore a patch to honor Gene Upshaw, the former Oakland Raider who was head of the NFLPA, when he passed away in 2008.

The team also wore a decal on the back of their helmets in 2014 to honor former Coach Chuck Noll, with his initials CHN.