Ben did a conference call with Titans beat writers this morning… 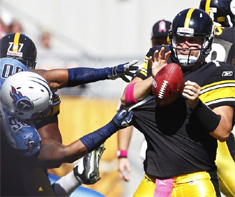 On the play of the Steelers offense so far –

“I think our offense is playing pretty well. I don’t know if it’s just me. We’re controlling the ball, we’re converting third downs, haven’t been sacked a bunch and just trying to get the ball to the playmakers. We have a whole bunch of them. To me that’s our best offense, get it out of my hands and get it to them and let them do.”


On the Titans defense –

“We came in this morning and we’ve been looking at film like crazy and trying to figure out this defense. I don’t think their defense is an indication of their record. I think they are a lot better than that. We have to prepare accordingly because I think they are a good defense.”


On what makes them a good defense –

“I think they get after the quarterback. They’re high motor guys. They never quit. You know, you may be blocked for the first couple of seconds, but all of a sudden if a quarterback or even a running back on a run play or something extends the play, they seem to be right there to make the play quick.”

“You know what, I just heard that. I never said that – I was never quoted as saying [the Eagles played] ‘dirty’. I think they’re a very physical team, they like to get after you. I think it might have been misunderstood when I said that, ‘they get after it’, get after me. We tell all these guys to get after the player, that’s just being physical and trying to make plays. If I call someone dirty, you’ll know it. I saw a couple of plays where some of their guys jumped on Pouncey’s back and tried to spike him in the back, but I don’t think anyone intentionally tried to come after my head.”


You can listen to the audio of his interview here.

Ben also spoke to the Pittsburgh media today. Some of the topics covered included success with third downs, the return of Rashard Mendenhall, getting touchdowns instead of field goals, and the situational use of spiking the ball late in the half!

You can read his transcribed interview here. 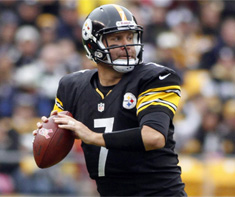 Roethlisberger rallies Steelers past Eagles: The Philadelphia Eagles claimed a 14-13 lead midway through the fourth quarter and the Pittsburgh Steelers appeared on the verge of a 1-3 start.

Instead, Ben Roethlisberger converted a pair of critical third downs on a 64-yard drive that covered the final 6:33 of the game and culminated with Shaun Suisham’s 34-yard game-winning field goal to give the Steelers a 16-14 win against their Keystone State rivals.

Stat of the Week:

“It’s an awesome honor” Ben said after practice. “Shoot, a storied franchise and he’s The Guy, the face of this. I know there’s a lot of ’70s Steelers, but, when you’re talking about quarterbacks and offense and stuff, he’s the guy. To have an opportunity to break another record – and this one is a pretty big one.”