Highlights from his interview: 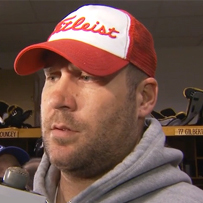 Did the frustrations come from knowing how good this offense could potentially be?

It can come from just wanting to win, truthfully.

It comes from just wanting to do anything to win football games, knowing the potential we have and the players we have.

It was just a lot of frustration and I shouldn’t have said that. That’s my fault.


On why he felt the need to apologize, and whether it was because he had made his frustrations public:

Yeah, just apologizing for the storm that it created and caused. We do have a lot of talks behind closed doors about things, about plays, play calling, if I’m doing something that’s not right on the field, we have talks about everything. Coach Tomlin and I meet every Monday to talk about the game and what goes on. Just the frustration after a loss and especially feeling like it was my fault, just things blew up.


On how he feels about the offense:

I feel like we’re doing pretty well with a lot of injuries. We have a lot of moving parts. The line has done a great job of filling in. Obviously, we want to be more successful, we want to score more points and we want to win games. In that sense, I feel like we need to be better as a unit.


On his relationship with Coach Haley and seeing “eye to eye”:


Is Heath Miller a guy that comes back to the huddle and lets you know about it when he’s open and does not get the ball?


No. I’ve always said that Heath is one of the most selfless teammates I’ve ever played with. I’ll ask Heath if he was open and he’ll tell me no. I’ll look at film and he was wide open. That just speaks volumes for him that he’d tell me the truth if he was open or wasn’t. That way I know if I need to come back to him.


You and the Bengals are similar teams in similar situations but the Steelers have more experience with these types of situations. Can you use that to your advantage?