“I’m just trying to play this game and this snap. This is a physical game, as we see every week. You’ve got to take it one play at a time. I’m going to give everything I have on every play and if that leads to me playing every play, then we can talk after the season about what it felt like.” — Ben 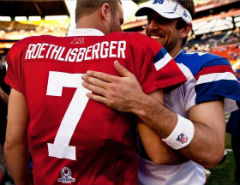 How far would you say the no-huddle has come this year? Are you guys constantly adding to it as the year has gone on?

Impressions of going to Lambeau Field:

I don’t yet. I’m excited, obviously, all of the rich history, the tradition. From what I saw from the forecast, I’ll get the full effect of it. Just excited to go up and to be a part of something that has been around, and the people that have played there, it will really be neat.

No, I wasn’t. I had my knee surgery a couple days before that so they didn’t want me to fly. No flying after surgery, so I stayed at home and watched it on TV.


Have you thought much about the Super Bowl since then?
Nope.


Not even this week?


Not even looking at film?


Are you lying to me right about now?

Maybe. [Laughs] How do you not? The Green Bay media asked me the same thing and it’s, “What do you remember?” I said, “Losing.” That’s all that matters. That’s all you remember from a game like that. It’s here and now. That was a few years ago. We’re a different team and they’re a different team. It’s not like let’s go get some payback or revenge or things like that. It’s just let’s go up and take care of the business that we set up to try and take care of.


How have the Packers changed?

They’re a different team. They’ve had some injuries on defense, but they still have some of their main guys – [A.J.] Hawk, Clay [Matthews] and [B.J.] Raji. They’ve got some guys that are going to create some issues for us that we’re just going to have to do the best we can to protect.


If it is Aaron Rodgers who starts, this is a rare opportunity for you to go up against him. How much do you relish going up against a guy like that?

Well, I don’t have to go against him. As the quarterback fraternity, you never like to see a guy injured, especially one of the best in the game. Whether he’s out there or not, it’s pretty much just for our defense to figure out who’s playing. I hope he gets healthy and is back next week.


What makes you so excited about where the offense is headed?

I think if you look at the production that’s happened, from the first couple weeks, obviously, we turned the ball over a lot early, but even just aside from the turnovers, the points have gone up. I think production has gone up, and I think that the mistakes have really come down. I think guys enjoy doing it. I’m sure if you ask the receivers, they like it. Le’Veon [Bell] likes it, mixing in the run and the pass, so it’s not just pass-heavy. I think just being able to take what coach helps me with and what we, whether it’s Coach Randy [Fichtner] or Coach Todd [Haley], the other quarterbacks, we put so much work in. It’s more than just me calling it. I know I get a lot of the credit, but it’s all of us really.


How important is it to keep the continuity with the players and coaches?

Very. This is a lot about communication. Sometimes it’s just a look. Sometimes it’s the slightest of hand signals. It’s not always just black and white. There has got to be some little things that you have to practice and do reps with. Sometimes you don’t get a practice and you just have to hit it on the fly. There are times that in between series I’m telling guys, “Hey, this series I’m thinking about this.” It may be something that we never put in and we’ve gone out and executed it. To me, that just shows the hard work and determination and the full effort from everybody.