“We all feel bad for T.J. Everyone knows how bad he wants to be out there. He was here every single day and he didn’t need to be, working, busting his butt. He should get taken care of…He needs to get paid. He deserves every penny that he wants and asks for. TJ Watt is THAT guy!” — Ben, on T.J. Watt’s contract negotiations. 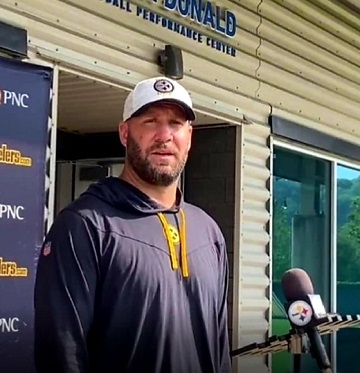 The Steelers will start two rookie offensive linemen on Sunday against the Buffalo Bills, with Kendrick Green at center and Dan Moore Jr. at left tackle.

What they might lack in experience making their first NFL start, they have in the backing and encouragement from their quarterback, something that can be just as valuable.

Ben Roethlisberger said he knows Green and Moore are coming in with the right approach. There might be growing pains along the way, but the one thing he is sure of is there won’t be a lack of effort.

“It’s not like they’re perfect or they don’t make mistakes, but I think when they do make mistakes you can see how much it burns at them. It bothers them when they make a mistake. I think that’s a sign of a professional. It’s a sign of a man that takes pride in his work. And I’ve seen that from those guys. They’re both going to be exceptional football players.

“So, I’m excited for them. I think they’re nervous and excited. They have a passion for this game and this team, and you can see it already. You can see those two bleed black and gold. It will be fun for them to get out there.”

Moore will have the daunting task of protecting Roethlisberger’s blind side, something Roethlisberger was comfortable with having Alejandro Villanueva do in the past. And while he will miss those on the line who are gone, like Villanueva, Maurkice Pouncey and David DeCastro, he has confidence in those who are now taking on the challenge.

“I miss all those guys up front, obviously, but I have to have confidence in who’s up there and in front of me now. I’ll have faith that Dan is going to get it done. If the game’s over and he’s given up seven sacks, we might have to have a talk. But I don’t anticipate that happening.

“I’ll say it over and over, they’ll be growing pains I’m sure. But he takes pride in his work and I’m excited about that.”

And when those growing pains do show, Roethlisberger said the most important thing is to just put it behind them, go on to the next play, and stay together as a unit, something he has to reiterate to the young guys.

“Just making sure, especially someone like K.G. (Green), he’s a passionate football player. He gets going and I have to reel him back and say, ‘listen, you’re the center, you’re too important to dwell in the last play, whether that’s getting feisty with a guy or you made a mistake, or you did something really well’. You have to almost be a quarterback mentality. You have to move on and that’s what I’ll just try and keep an eye on guys as we go to see who maybe can’t calm themselves back down or is getting too riled up and just do my best to bring it back into an even keel.”

The offensive line isn’t the only place where rookies will be making an impact. Najee Harris will be the starting running back and Pat Freiermuth is listed along with Eric Ebron as the potential starting tight end. It’s putting Roethlisberger into a role almost of a teacher, while at the same time he is a student learning new offensive coordinator Matt Canada’s offense.

“I’m still trying to learn it too. It would be one thing if I was helping these guys learn an offense I knew like the back of my hand, but we’re all learning together. And we’re all going through the growing pains together. The only advantage that I have over these guys really is that I’ve been doing it for a while. I kind of know what to expect when I step into a stadium. And it was fun, even in the preseason, being able to talk to Najee and all these guys. It feels different. There’s something different about stepping in an NFL stadium. And as we all know, anyone that’s covered football like you guys have for a while, you get to a preseason game and it’s got a feeling, but you get to the regular season, it has a different feeling in itself. Everyone’s going to be nervous. If the guys, when I ask them if they are nervous and they tell me they aren’t nervous, I call them a liar because I’m nervous and I’ve been doing it for a long time. So, it’s going to be fun.”

You can watch video of Ben’s Q&A here.