Vince Rubino of Akron, Ohio wanted to share his fan story, or rather, his young daughter’s fan story that took place during last year’s training camp.

He thought it might be a nice way to start off this year’s training camp! 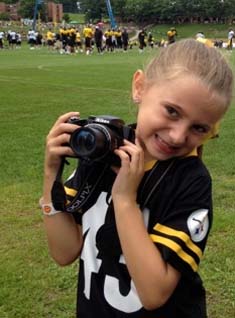 I wanted to thank Ben for being so gracious to us last summer at Steelers training camp in Latrobe. My 6-year old, Gianna, begged me to take her to a Steelers game in 2011, but coming all the way from Akron, Ohio where we live, I knew between the drive and the game, it would prove to be too long a day for her age. I did the next best thing, I surprised her last July by taking her to Steelers training camp so that she could get an up-close look at her team!

I remember how excited I was when my dad took me to Steelers training camp when I was about the same age, and I was hoping it would become the same great memory for her. I think she asked, “Where are we going?” every 10 minutes of the 2-1/2 hour drive from Akron to Latrobe. We pulled into the beautiful rolling green hills of St Vincent’s College and it looked very much the same as I remember seeing it as a kid. It wasn’t until we walked to the practice field that she realized THESE were the REAL Steelers!

We watched practice and Gianna was so excited she took over our camera. I got a kick out of watching her click away and how quickly she recognized her favorite players, Big Ben and Troy Polamalu.

Then came time for autographs.

We gathered at the fence waiting for the players to walk by. Gianna was in the perfect position – right along the fence – to get autographs and take photos as I watched from just a few feet away. Unfortunately some of the bigger kids (the adults!) started to get overly excited and started pushing aggressively to position closer to the fence. I could see the panic in Gianna’s eyes just before the crowd around her unknowingly started to trample her. I was afraid she would get hurt so I rushed to pull her out from the front of the crowd, but before I could I heard someone shout, “Whoa, look out guys! Please back up, I’ll get to you, but there’s a little girl here!!”

I was shocked to see it was Ben Roethlisberger! He saw the crowd of fans pressing Gianna against the fence. She was frightened and in tears and he asked the crowd to move back to give her space. I was then able to move forward and pick her up. Ben smiled, repeatedly asking if she was “Okay” and calmly asked her, “What’s you’re name?”. Gianna was suddenly too shy to tell him her name so I said it for her. You could tell he was trying to calm her down when he noticed the camera around her neck and joked, “Geez, that camera is as big as you are!”. Ben then asked if she wanted to take his photo and she nodded. He stood back and smiled so Gianna could take his photo. Before he walked away, he thanked her for coming out, gave her a big smile and said “See ya, Gianna!”. She was thrilled! 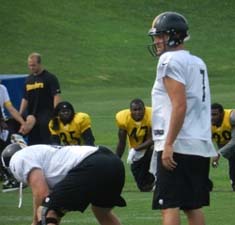 Professional athletes always seem to get a bad rap, but it was nice to see Ben go out of his way to make sure my daughter was Okay. He showed genuine concern when he saw her in tears, and then stuck around to make sure she was alright.

Unfortunately for Gianna, when we looked at the photos she took we realized that she only got the top of Ben’s forehead in her very closeup photo! She did take some great photos of him practicing (like the one at left) and still tells everyone the story about how she met Big Ben and how he “saved her from the crazy crowd.” She has already asked about going back to training camp this year so that she can take a better photo of Ben.

Ben further reinforced our love for the Steelers and for him! He helped make our training camp experience a memory we will never forget! Thanks! — Vince Rubino


*Thank you to Vince and Gianna! 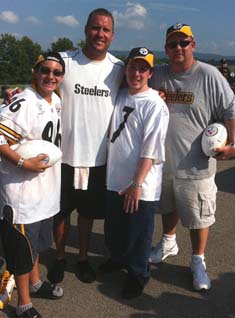 BigBen7.com friend Jeffrey Metz had the opportunity to meet Ben last July. In fact, Jeff flew 3,000 miles from California to his uncle’s home in Florida, then rode in the car another 1,200 miles to training camp in Latrobe….all in the hopes of meeting his favorite player!

He not only met Ben, but had an incredible story to share about that meeting, told by his uncle, Mickey Metz!

Jeff asked if we could start 2013’s training camp off by re-sharing his story with other fans that may not have had the opportunity to read it last year.

“That story is truly amazing, Steelers fan or not,” said Jeff. “It sounds like a movie script or something like that. More people deserve to hear about it! Truthfully, I can’t believe I was a part of it. I can never thank Ben enough for the amazing memory!”


Jeff, here’s the link to your story once again!