Ben: “I feel like this year could be one of my best”

Home/News/Ben: “I feel like this year could be one of my best”
Previous Next

Ben: “I feel like this year could be one of my best”

“I firmly believe my best is yet to come. I do. People may laugh, that’s fine. People can say what they want.” — Ben, during a round of interviews with the media today.” 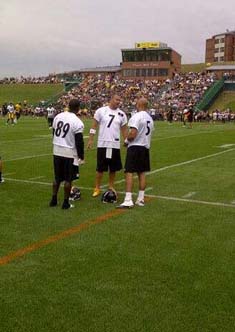 Buoyed by a return to health, a better relationship with his coach and what he sees in his teammates, Ben Roethlisberger predicted good things for himself and the Steelers in 2013.

“This offense is like a new toy,” Roethlisberger said in an interview Saturday with the Pittsburgh Post-Gazette. “It’s like I’m opening this present and I can’t wait to see what’s going to come out of this thing with all these guys and this offense. I’m generally excited for this year.”

He and Todd Haley, his offensive coordinator, had a somewhat frosty relationship during their first season together in 2012. That’s changed and developed into one the quarterback called “actually good.”

“And I’m not just saying that,” Roethlisberger said before the Steelers took the field for their first practice of training camp at Saint Vincent College in Latrobe. “Last year obviously had its growing pains; it is what it is. And it’s more than just him and I. It was him and other coaches, him and other players, but obviously people are going to talk about the quarterback and the coordinator more.

“But there was no hatred, none of that stuff people made it out to be. It was nothing like that. We had our times when we butted heads, but I butted heads with [former coordinators Bruce Arians and Ken Whisenhunt].”

He reiterated that his shoulder and ribs have long healed, and said his right knee, which underwent minor surgery to clean out some cartilage, feels fine, although he did not want to dispute Mike Tomlin’s assessment Friday that he was feeling “discomfort.” He did not run with his teammates during the annual run test on the first day of camp because he was told not to by a trainer, Roethlisberger said.

“I feel great. I’m ready to rock and roll. I can’t wait for practice. I don’t think I’ll be restricted at all.”

And he says he is in better shape. His weight’s down, he says his physique is better and he’s concentrated on building more upper-body strength, including kayaking as one method of doing so.

“I pushed myself to be better. I want to be better, a better player. Last year, I was playing well [before the injuries]. I feel like this year could be one of my best. Obviously there are a lot of factors, injuries and all that, you have to stay healthy, the line has to stay healthy.

“I honestly felt I was getting better. I still am. There will be a time obviously you can’t get better because you get older but I don’t think that’s time for me yet.”


You can read more from Ben’s interview with Mr. Bouchette this afternoon here.

You can also read more from today’s chat with the media here.