“I didn’t play well enough to win, and guys look at me as the leader and the quarterback to make plays and I didn’t do that. I want to apologize to the fans, my teammates, to the organization, to the Rooneys and to the coaches. I wish that I could apologize to everybody individually.” — Ben

On his individual records this season:

And from Ian O’Conner, at ESPN.com this morning: 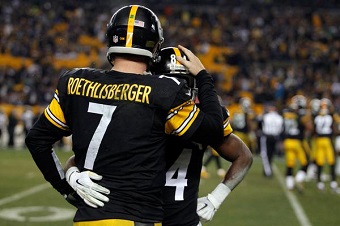 Ben Roethlisberger was done with the traditional handshake or three, done meeting the obligations of a losing quarterback, when he lowered his chin and jogged toward the Heinz Field staircase that would take him down into the winter of his discontent.

Fans leaned hard over the railing and shouted his name. One swung his hand and grazed the top of the QB’s helmet. Roethlisberger didn’t stop. He shook his head ever so gently from left to right, letting everyone know this wasn’t the time or place for eye contact or small talk or even a halfhearted high five.

This one hurt a ton.

It really wasn’t Roethlisberger’s fault, of course, not when you consider Bell’s absence, the lack of worthy substitutes and the pressure all that put on the quarterback. Roethlisberger ended up with a workable box score — 31 completions on 45 attempts, 334 yards, one touchdown pass, one interception that came on a deflection and another that came on a desperate endgame scramble after he was driven head-first into the grass and knocked from the game.

“I was kind of laying down there,” Roethlisberger said, “and wanted to make sure I could feel everything.”

He banged his passing hand on someone or something with 1:06 left and the season already lost, the final indignity on a night full of them. This was supposed to be Roethlisberger’s year too. He had outplayed the two AFC elders who had owned his position, Peyton Manning and Tom Brady, and he appeared primed to carry his team on a deep postseason run.

Yes, in Bell and Antonio Brown, Roethlisberger played the regular season in the company of the best running back and wide receiver in the conference. But this team wasn’t about Big Ben’s weapons as much as it was about Big Ben.

He was having a career year in the heart of his prime, just as Manning’s right arm seemed ready to come unhinged and go sailing off with the ball on the next deep out. If the Steelers advanced to the Super Bowl and won it all, this time around, Roethlisberger wasn’t planning on being underwhelming enough in the big game to let a Hines Ward or Santonio Holmes leave the building as MVP.

Roethlisberger emerged from the trainer’s room with a heavy ice wrap tethered to his hand. Someone asked him to sign a program, and the quarterback somehow grabbed a pen with a claw grip and scribbled his name.

“It’s going to sting for a while,” Roethlisberger said of his pride, not his hand. “I wish I could apologize to everybody.”

Soon enough, Roethlisberger was walking with his wife through the bowels of the stadium, heading for the parking lot. He still has those two Super Bowl rings tucked away somewhere, along with 10 victories in 15 postseason games and the franchise record (taken from Bradshaw) for most career postseason completions.

This really felt like his time too, after he put up Brady and Manning numbers in the regular season. That’s why it hurt so much. That’s why the pain Roethlisberger felt on the ride home had nothing to do with his hand or neck.


Thank you Steeler Nation for the emails, Facebook messages & tweets of support!