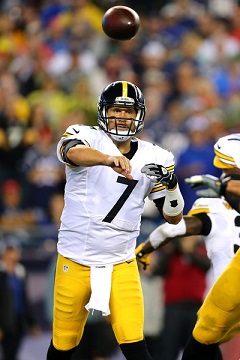 On overall assessment of week one –

There are no excuses. I think guys stepped up great tonight. I thought [Sammie] Coates did a great job and [Darrius Heyward-Bey] and DeAngelo ran the ball awesome. The Patriots were a better football team.


On moving the ball well, but having to settle for field goal opportunities –

Yeah, you know there were a couple situations [where] we got down to the one [yard line] and we had some… we had a false start on one and one we didn’t get it in, so it is frustrating. We have to go back and figure out why. Is it something they did or is it something we did?


On getting upset about one false start call and ruling –

In my years of playing, a defensive guy can’t bark stuff or move in the middle of a cadence. I agree that the refs said that we didn’t go in the neutral zone and I agree with him. I wasn’t arguing that part. I was arguing the fact that he shifted in the middle of a cadence and I thought that there was a rule against it. Maybe there’s not – maybe it’s a written rule – I don’t really know. So, that’s what I was upset about. They do that. We saw it on film that the Patriots do that. They shift and slide and do stuff on the goal line knowing that it’s an itchy trigger-finger type of down.


On the first drive pass attempt to Antonio Brown –

From when I came off the sideline coach Haley told me was that, they only rushed three guys on that particular play and he had no idea why. It’s not like there was any crazy situation and when they only rush three and drop everybody else it doesn’t leave you many options.

Awesome. I thought he stepped up and did some great things for his first time out there with a lot of outside question marks, but we believed in him the whole time. We were confident in what he could do.


On what needs to be improved after tonight’s game –

Everything. We need to get better. This is a small step in a long journey. We need to stay together and get better and I think we will do that.


On the late pass that was picked –

It wasn’t late. I just threw it as far as I could against the wind and it just didn’t get there far enough. Not a strong enough arm.


You can see video of Ben’s interview and read Q&A’s with Coach Tomlin, DeAngelo Williams, Cam Heyward and more here.


“Regardless of the situation, quarterback Ben Roethlisberger is a true horse who can never be counted out of a football game. He was missing running back Le’Veon Bell and wide receiver Martavis Bryant but threw for 351 yards, something New England coach Bill Belichick said is a given for the Steelers.” — The Sports Xchange