Home/News/Clark Judge: AFC Champs and the Draft
Previous Next 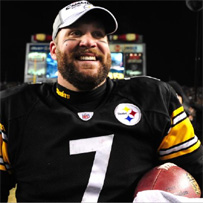 Pittsburgh is one of the feel-good stories from 2010, a team that overcame a raft of adversity to graduate to Super Bowl XLV.

The surprise, of course, is that the Steelers didn’t close the deal. Ben Roethlisberger hadn’t lost a Super Bowl, and the organization was six for seven. But lose they did when Roethlisberger failed to recreate the last-minute magic that makes him one of the league’s premier quarterbacks.

Now it’s up to the front office to make something happen, and there are few teams I trust as much as Pittsburgh when it comes to the draft. These guys know talent, one reason the Steelers are one of the most consistent and successful franchises anywhere. In an era where dynasties aren’t supposed to exist, the Pittsburgh Steelers continue to excel…year after year after year.

One reason is that they have a franchise quarterback who knows how to win.


Starting with the QB:

Roethlisberger isn’t just a franchise quarterback. He’s a franchise quarterback who’s been to three of the last six Super Bowls, winning two of them. Not bad, eh? It gets better. He’s only 29 and just completed one of his most efficient seasons anywhere. But Roethlisberger absorbs a lot of hits, so it’s always good to have a backup around. Charlie Batch turns 37 this season, so a young guy to groom isn’t a bad idea.


You can read the rest of Mr. Judge’s Draft analysis for the Steelers here.