Home/News/Seven years ago today…
Previous Next


“It’s a dream come true. I’ve always wanted to play in the NFL. Everything I get to do, meet all these coaches, see Al Davis, visit with Warren Moon, it’s a dream coming true. It’s hard to believe. I have to pinch myself and make sure it’s true.” — Ben, on  playing in the NFL. 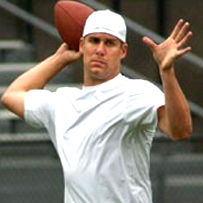 “He’s probably going be gone before we pick, but I always want to cover our bases in case something happens – he falls or we move up,” Sherman said. “I thought he had an excellent workout. He did everything here he does on tape. You have to watch the game tape to really appreciate what kind of quarterback he is and what kind of leadership skills he has.”

“The thing I find unique about it is every one of those guys is different,” said San Diego Chargers coach Marty Schottenheimer. “Ben Roethlisberger is a giant of a guy, a terrific athlete. Reminds me of a (Daunte) Culpepper or a (Steve) McNair. He just has a rocket of an arm and had a terrific workout. Eli is very cerebral and has a very natural, fluid motion. Philip Rivers has a demeanor about him, a presence.

“History and statistics tell you they can’t all be really good players in this league. But this may be like the draft of ’83.”

One reason why San Diego might be willing to trade with New York and drop down to the No. 4 pick is the belief that it will get Roethlisberger, who put on a show for scouts at his workout with his arm strength and mobility for a guy who is 6-foot-5 and weighs 242 pounds. Schottenheimer is also familiar with Roethlisberger because his daughter went to school at Miami (Ohio).

“The one thing about him is he played very well late,” Steelers coach Bill Cowher said. “You watch him play, down the stretch he played very well. He’s a big, strong guy – fast, good athlete, probably a lot of upside to this kid. I think he’s a very solid quarterback.”


You can read the rest of Mr. Kotala’s pre-Draft summary here.