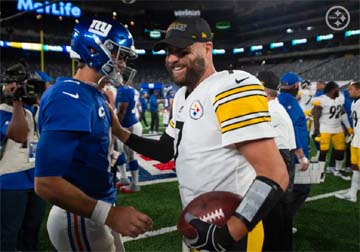 Not only was Ben Roethlisberger back on the field on Monday night, leading the Steelers to a 26-16 win over the New York Giants, but after playing his first game in a year, his elbow that required surgery was about the only thing that didn’t hurt him the day after the game.

Roethlisberger said he was sore from simply playing football again, but the arm felt good.

“I was saying today I feel like I was in a car accident. Yesterday I felt like I was in a train wreck. So hopefully tomorrow it will just feel like I fell off a bike,” said Roethlisberger of the progression of how his body feels. “I am definitely sore.

“The good news is my arm is the only thing that doesn’t hurt, so that is good.”

Roethlisberger doesn’t plan on practicing on Wednesday, something that has been the norm for him just to let his arm recover. He also will continue to protect the arm like he did on Monday night when he wore a sleeve on it while on the sidelines to keep it warm.

“My arm feels great,” said Roethlisberger. “We’ll keep the same routine as far as Wednesday rest day and then we will get back into it. Hence the sleeve I wore on the sideline and the sleeve I wore during the game. That’s going to be the biggest thing, make sure it stays warm. For the most part we are going to do everything we can to keep it healthy and warm.”

Roethlisberger had a strong first outing, completing 21-of-32 passes (65.6 percent) for 229 yards, with three touchdowns, no interceptions, and a rating of 117.8. But he is his own worst critic.

“I looked at the way I played, decision making. There was rust early,” said Roethlisberger. “It’s not like I played perfect. I looked at sometimes maybe I got out of the pocket a little too quick or didn’t have the same feel in the pocket early on that I am used to having. I think that just comes with not getting hit, even in practice. Yeah, you have a pocket, you step up, but defenders aren’t hitting you in practice so you lose some of that feel of where you can slide to, where you can step to. So, I think that will come back the more reps and plays you get.”

As he indicated last week, Roethlisberger had jitters on Monday night, but most of them coming on the bus ride from the team hotel to MetLife Stadium. He said once he got to the stadium, and the atmosphere with no fans anywhere, that calmed him somewhat.

“It was incredibly different,” said Roethlisberger. “Pulling into the stadium and not having tailgaters and not seeing fans. I definitely had jitters on the bus ride over, but when you pulled into the stadium and not seeing all that usual kind of buzz before a game it calmed me down a little bit. Parking the bus outside the stadium and walking in, and not having cameras in your face, made it a little bit calmer. Taking the field for the first time with the quarterbacks and tight ends how we go out, it was emotional for me at first and then when you run out of the tunnel and there is no one screaming at you good or bad. Without having any fans, it was hard to describe. It definitely helped ease some of the nerves. It was definitely different.”

Roethlisberger knows it will be different this Sunday as well when he plays his first game in over a year at Heinz Field and the stands are empty.

“When I got hurt, and knowing I was going to come back, one of the things I was most excited about was running out of the tunnel at Heinz Field in front of our fans,” said Roethlisberger. “To not have that this time I am going to be a little disappointed, but I know they will be there when it’s time.”