“I’m so excited, just thankful. I told the guys in the locker room before the game that the reason I came back was because of them. I don’t need to accomplish anything personally anymore. It’s about being with the Defense that I think is as good as any I’ve ever played with; Skill guys that are young and fun to play with; and of course my Line, who I love to death and they love me. They’re the reason I came back to play.” — Ben, immediately after the game. 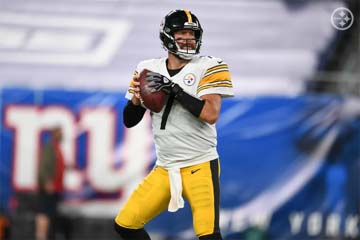 Roethlisberger led the Steelers to a 26-16 win over the New York Giants, spoiling coach Joe Judge’s debut. He was 21-for-32 with three touchdown passes in the game.

When asked how he felt taking the first snap of his returned, Roethlisberger replied, “Awesome.”

“I’m blessed. I can’t thank enough people. I don’t have enough time. Obviously starting with my Lord and Savior Jesus Christ. My wife, my family, my friends, the doctors, my teammates. It just feels so good to be out there with them. And I’m just so thankful and blessed with this opportunity,” he said after the game.

The Steelers were down 10-3 when he threw a 10-yard touchdown pass to JuJu Smith-Schuster. He then found James Washington for a 16-yard touchdown with 7 seconds left in the first half.

He would put the icing on the cake for the Steelers in the fourth quarter when he found Smith-Schuster again for the 8-yard score.

Benny Snell led all runners with 113 yards on 19 carries after James Conner left the game with an injury.


Ben is the Steelers Digest ‘Player of the Week’: 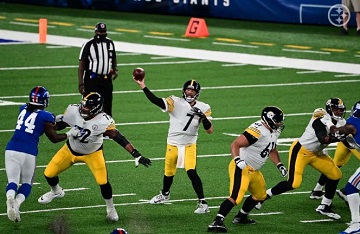 For most of his Steelers career, he has been the difference, and during a 2019 regular season in which he missed all but six quarters because of an elbow injury it became clear exactly how much of a difference Ben Roethlisberger is.

In the days leading up to the game, Roethlisberger admitted he expected to feel jitters in advance of Monday night’s game against the Giants, and since it had been 364 days since he took a competitive snap in a real NFL game it also was understandable that he would be rusty as well.

But it all came together for him and for the Steelers on the final possession of the first half, which was an eight-play, 78-yard drive that ended with a 13-yard touchdown pass to James Washington that gave the team its first lead of the night, and it ended up being the lead they never would relinquish in a 26-16 victory.

After completing 21-of-32 (65.6 percent) for 229 yards, with three touchdowns, no interceptions, and a rating of 117.8, Roethlisberger is the Steelers Digest Player of the Week.

With his last touchdown pass to @TeamJuJu, @_BigBen7 has now thrown for 366 career TDs, which is a franchise record and tied with Eli Manning for the eighth-most in NFL history. pic.twitter.com/AWjyMvGoNs


Magic on our side –

The Pittsburgh Steelers looked good with Big Ben back on the field in their victory over the Giants 26-16! Coach Mike Tomlin and Ben Roethlisberger is a great combination. The Steelers are definitely a playoff team!


Hope you enjoy the rest of your week, Steeler Nation!