Home/News/Cam: ‘Ben’s still got the goods’
Previous Next

“Anyone that tells you otherwise, they haven’t really looked at football. You give that guy a good running game and tell him he doesn’t have to throw the ball 50, 60 times, he’s going to be that much more dangerous, and I think we’re looking forward to that.” — Cam Heyward.

From Andrew McCarty at The Spun: 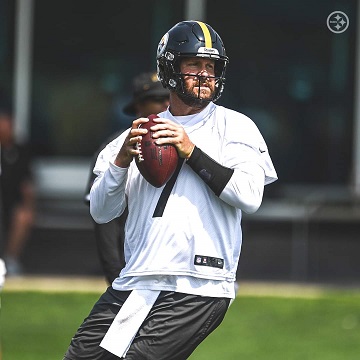 Following his comments, critics of Ben Roethlisberger only grew louder. They pointed to the Steelers losing six of their final seven games – including one embarrassing playoff loss to the Cleveland Browns.

However, Heyward is still riding with his longtime quarterback.

“I think we’re just blowing it out of proportion,” Heyward told reporters. “We went 11-0 to start the season. How many other quarterbacks did that?”

“I think we can sit up here and talk about how we lost the game last year. We lost to the Cleveland Browns, OK, so be it. We fell off at the end. We still made the playoffs. But I’m not here to say my quarterback is not able to do it. I’ve seen this guy win Super Bowls on TV. I’ve seen him day in and day out compete, and you just get frustrated. I know Ben puts in work. I know how much he cares about this team.”

“When I hear the bad-mouthing about him being a not great quarterback and everybody is ready to elevate other quarterbacks, I’m like, what have they done? This guy is a proven winner, but yet we’re ready to discount him. All I was saying was I think having a greater balance is going to make him that much more dangerous. I know our offensive line is in flux, but they’re going to be better because they’re learning a different system. We bring in another running back, our receivers are a year older, bring in another tight end. All these different things I think can help Ben, and I’m excited for him.”

Cam and Ben were both at OTAs today:

You can check out all the photos from Day 1 of OTAs here and all the news from Day 1 here.