Ben: Preparing for the Patriots

Home/News/Ben: Preparing for the Patriots
Previous Next

Ben: Preparing for the Patriots

“Well, I guess it depends who you talk to at what point in the season. I mean, are you asking the media those questions, are you asking a player? It’s different. We are probably too old on defense, we’re probably too young on offense, and we’re just trying to get by with wins.” — Ben, when asked about the Steelers level of play right now.

More highlights from Ben’s interview with the Boston media today: 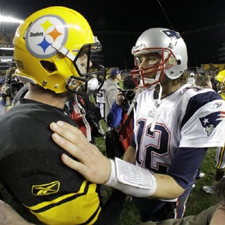 On the Steelers vs Patriots rivalry –

“It’s kind of special. They beat me in my first championship game. I’ve said it many times, I think Tom Brady’s the best and I think that translates and correlates a lot into them being one of the best teams in the league consistently.

“I think they do a good job. They switch from a 3-4 front to a 4-3 a lot to even a 3-3, so they mix it up on you. And then I think if you get into certain passing situations, they like to bring their linebackers from the outside. To me it’s about identifying and being able pick up those blitzes, because if you can’t, then you’re not going to be able to get the ball off. And also, when you put the big guy [Vince Wilfork] in the middle – he never seems to leave the field – but he makes plays in the run game, and you wouldn’t think, but in the passing game as well now.”


On staying off of “Wilfork Island” –

“Well, you definitely have to be aware. That’s going to be a heck of a job for whether that’s our center, or our guard. He seems to move around. I even saw him blitz off the edge one time – I think it was against Oakland, they kind of ran a mixer look and he rushed against the tackle. Whoever is against him, he is one of the premier guys in this league and I’ve got to be aware of him in the passing game as well now.”


On the health of his knee –

“Good. It came out with positive results on the tests, so typical Week 7 body, but it’s good.”


On his overall health at this point in the season –

“Well, you know, you ask any player in the NFL how much their body hurts, they’re all going to tell you ‘a little bit,’ but nothing that’s going to stop me or hinder my play.”


On the advantages of being with the “same coach, most of the same guys, and being in the same system much like Tom Brady” –

“It’s great. I’ve always said that I felt bad for someone like Alex Smith out in San Francisco, who I think in about five years had four coordinators, or whatever the ridiculous number was. I think that’s really hard for a quarterback. Any time that you can get familiarity with a coach, with a coordinator, with a play caller, whoever it is, I think it definitely makes it a lot easier on you.”

“Growing up, I was a Montana, Elway, Kelly-type guy. I wore seven because of Elway and I consider him one of the tough guys, so that’s kind of one of the guys I really tried to mold my toughness after.”

The Pittsburgh Post-Gazette‘s Ed Bouchette caught up with Ben at lunchtime and did his own interview.

You can read it here.

An interesting article has been posted this evening on Boston’s WEEI Sports Radio website entitled, “Patriots, Steelers are proof that stable QB/coach relationships are big key to success”.

You can read it here.