Time for a fun re-cap! 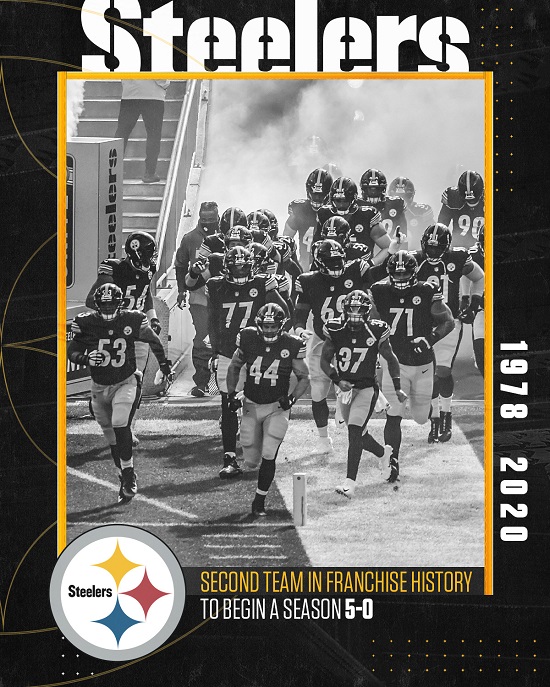 Not yet Cleveland. At least, not in Pittsburgh.

James Conner ran for 101 yards and a touchdown and the Steelers battered the Browns in a 38-7 blowout victory on Sunday to improve to 5-0 for the first time since 1978. Ben Roethlisberger added 162 yards passing and a score.

The Browns (4-2) were unable to get anything going against a defense that sacked aching Baker Mayfield four times, picked him off twice and chased him late in the third quarter with the game out of reach. The NFL’s top rushing offense managed 75 yards on the ground — 113 below its season average — as the Steelers dominated both sides of the line of scrimmage in easily their best performance in 2020.

Steelers begin a three-game road swing on Sunday when they visit the Titans. The game was originally scheduled for Oct. 4 before being moved while Tennessee dealt with a COVID-19 outbreak.


“I’m glad I only have to play them on Wednesdays, Thursdays, little parts of practice when I’m not live.”

Big Ben was relieved to watch the @Steelers defense from the sideline today, not the line of scrimmage 😂 (@TracyWolfson) pic.twitter.com/b3DrN8JvDs

Enjoy highlights from the defensive side of the ball here.

And check out highlights from the whole game here.

The Steelers’ 13-game regular-season home winning streak when facing a starting QB drafted No. 1 overall is the longest streak in NFL history. — Missi Matthews via Twitter.

Ref: Romo thinks [Claypool] got in.

Tony: I can't believe he doubted me…like I was going to get one wrong. pic.twitter.com/bHxxG8FVZ3

You can see some great game photos here.