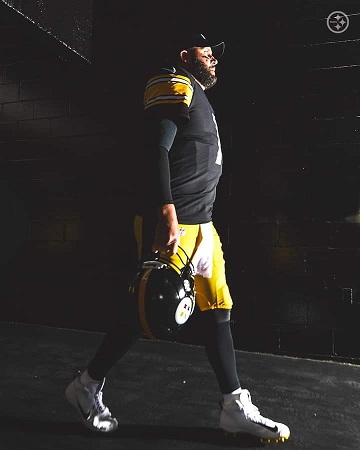 If you looked at the NFL rankings only, and saw the Steelers were ranked 24th overall in passing, ninth in the run game and 21st in total offense, you might stop and wonder how they are 5-0.

But if you watch them play, see what the offense is doing on a weekly basis, you get it.

This is an offense that has a lot of firepower on it, and while they aren’t putting up huge numbers, they are putting up the numbers they need to in order to be one of only two undefeated teams in the AFC, the other being this week’s opponent, the Tennessee Titans.

“We are a balanced offense. We are not putting up gawdy passing numbers right now because we haven’t needed to. I would like to think if we needed to, we could do that because we have some amazing pass catchers who can do great things with the ball in their hands. What we have been able to do right now is win football games and that is what’s most important.”

Roethlisberger’s numbers this season aren’t the best of his career with 114 completions for 1,178 yards and 11 touchdowns through five games. But he is doing things right, pushing the right buttons, playing smart football and has only one interception and managing the game the way he needs to.

“I feel like that is what I have been doing the last five weeks, trying to get us in the best play I can,” said Roethlisberger. “Trying not to turn the ball over and do things to help the team win the game. If we keep winning football games, I will keep trying to do that.”

Roethlisberger is also getting the ball out faster this year, something he joked that he has been criticized for not doing previously. He said it’s nothing he is aiming to do, it’s just the way it’s all working out.

“I am not trying to do anything,” said Roethlisberger. “Sometimes it might have to do with the play call, sometimes it might be an RPO so you really don’t have time to hold on to the ball because the line is blocking a run and you have to get the ball out quick. Sometimes we do what Coach Randy (Fichtner) says is get the ball in the hands of our playmakers quick, throw short, run long.”

Since Roethlisberger came back this season from his elbow injury, he has been tougher on himself than anyone could possibly be. Each week in practice he has focused on different aspects of his game, always trying to improve, always trying to take that next step. One of the aspects he focused on last week was his long ball, throwing at a trash can in practice. And while it didn’t play out as well in practice, against the Browns he was three for three on long passes.

“I only hit one can I think, so at least I completed more on Sunday,” said Roethlisberger. “But it’s just little things I talk about each week that I wanted to work on so, what better time than in practice to drill some things, footwork, deep ball things. I will continue to try and get better. I don’t ever want to get worse, obviously, so I want to try and find little things I can do to keep improving my game.”


You can watch the video of Ben’s interview here.

“Ben and I had a great working relationship. When I got there, I knew that if there was one quarterback I wanted to start a franchise with, it would be Ben.” — Former Bengals QB/ Steelers QB Coach Ken Anderson.

You can read more from his interview with Steelers Takeaways here.