Home/News/#7 makes the “Any Era” Top 5
Previous Next

“The guy has played with injuries, the guy’s been battered, hurt, he stays in there. To me he is one of the toughest quarterbacks in my era to play. This guy is my favorite quarterback! He’s like a basketball player playing football…He carries on that Steelers tradition, he’s tough.” — John Randle, voted into the Pro Football Hall of Fame in 2010. 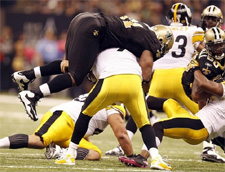 
“I don’t know who to compare him to because I don’t know any quarterback, for his size and strength, that has the mobility, the ability to extend the play, to move out of the pocket and that’s what makes him what he is. Ben is special.” — Mike Ditka, first tight end ever inducted into the Pro Football Hall of Fame, 1988.

Ben and Troy Polamalu weren’t the only Steelers players to make the Any Era Team: Hines Ward came in at #8, and James Harrison was #10!


You can listen to the Hall of Fame panel discuss their player selections here.

You can read what other Hall of Fame players had to say about Ben here.

ESPN’s AFC blogger Jameson Hensley interviewed the man who is #1 on the list, Ray Lewis. Mr. Lewis had this to say about his friendship/kinship with Big Ben: 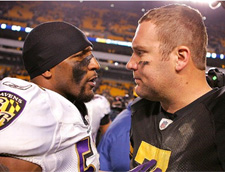 “Every time we see each other, you’re going to always see — nobody [has] never noticed it — but any time we play each other, I put my hand over my heart and he puts his hand over his heart, and we give each other the nod — warriors going at it — whatever it takes. And that’s the ultimate respect, because when you see guys back in the day, they gave that respect. That’s what the game was always built upon. That’s what makes the [rivalry] so fierce, because back then, when you looked at the old-school Dallas Cowboys and the old-school San Francisco 49ers, you knew what you were getting, but they respected each other so much. Today, when you think about Ben Roethlisberger and me, you think about old-school mentalities, no matter what it is. That’s why, every time — win, lose or draw — we’re going to always be friends.”