Home/News/Thursday: LIVE from Hawaii
Previous Next

Ben sat down with Fran Charles and Marshall Faulk on the NFL Network set after practice this afternoon for an interview during their AFC Pro Bowl Practice coverage. Some highlights from his interview: 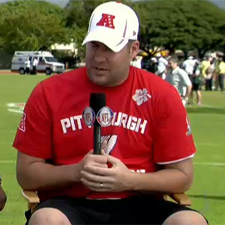 On his second Pro Bowl appearance –

“It’s fun. It’s neat to come out here, it’s an awesome honor and a privilege to be out here with some great players, and guys that you compete with, and to have fun with some of the defensive guys that you get into it with during the season (laughs).”

“It may sound crazy, but sometimes I shouldn’t come back in the game (smiles), but for me, I want to do it for my guys, my teammates, my brothers. If they’re out there battling through injuries I feel like if I can be out there, I want to be out there. The issue is you walk that fine line with going out there injured and hurting your team or helping your team. I never want to cross that line and hurt the team. Obviously, a lot of those things I put in the coach’s hands to make the final decision because that’s the way it should be. But for me, I just want to be out there for my guys to let them know I’m going to battle through anything with them.”

“Part of it was definitely that…dealing with that big ankle brace that I wear and how and what are my limitations? What are our limitations as an offense?…Part of it was that and part of it was we were playing for a chance to win the North and get that second seed.”


On losing Bruce Arians as his offensive coordinator –

“Well, anyone who knows about the Pittsburgh Steelers, it’s family – from the Rooney’s all the way down to the training staff and to the equipment staff, everybody. So when you lose a family member it’s always tough. And I say that whether it’s a coach, a player, if we lost a trainer…it’s hard for us because we are all family. I don’t know whether you can ever replace a guy like that, but it’s a business and the powers that be make the decisions and we live with it, we go with it. Change is not always easy and the Steelers are a team that don’t do a lot of change, the coaching staff really hasn’t been much different for a long time. It’s definitely different for us, but we love Bruce, I love Bruce – we have a great relationship, all the offensive guys do. We’ll just have to see where we go from here.”


On becoming more of a passing offense –

“You have to in this league now. I mean, look at these teams that are winning now! They are throwing forty to fifty times a game. I’m not saying that’s all you have to do – I think you have to be able to run the ball in key situations and do those kind of things, but we have a good young group of guys and that was what was kind of shocking to us because we feel like we’re really kind of close to being great. Bruce did some awesome things. He kind of took Whiz’s offense and modified it, added some things, took some things out, we tweaked things, and really kind of made it our own baby.”

You can watch video the interview here.


*If you can catch the replay of the AFC Practice at midnight tonight (set that DVR), you will also catch some of Ben’s antics with his Pro Bowl center, Nick Mangold.

Ben will also appear on NFL Network’s “NFL Total Access” tonight at 7:00 p.m. Not sure if this will be a new interview or segments from the interview conducted after practice. 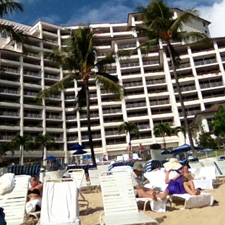 From an article posted at NFL.com entitled, “Rodgers, Brees and Roethlisberger obsess over ring race”:

Brees, Rodgers and Roethlisberger are spending this week in Hawaii, preparing to play in Sunday’s Pro Bowl. Oh, they’re enjoying paradise, embracing the honor of being at the top of their sport on an individual level. But as each one will testify, there’s only one place they really want to be.

“The hard part is, it’s such a rare thing to get to the Super Bowl, so you never know if you’ll ever get back,” Roethlisberger said. “So after your first one, you’re just so happy to get the one.”

Ben took the photo above of the beautiful hotel they are staying at this week!