“A win is a win to me, that is all that matters. I don’t care what my stats are as long as we win the football game. I did feel during the game I wasn’t playing my best football. I know the stats are one thing, but I felt like I left some plays out there. It was probably the adrenaline early, so I missed a couple of early throws, but I think we all calmed down, myself especially, as we moved on to the ladder parts of the game. I was a little disappointed. I just thought I could have played better.” — Ben, during Tuesday’s show.

Just in case you missed Ben’s radio show yesterday, 93.7 & KDKA posted a re-cap and a podcast: 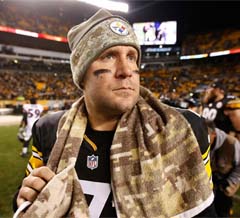 The Steelers are coming off a very convincing 43-23 win over the rival Baltimore Ravens. It’s the Steelers third straight win at home and has them right in the thick of the AFC race.

Roethlisberger followed up his record-setting day over the Indianapolis Colts with another 6 touchdown performance over the Ravens.

Ben told the guys the win over the Ravens felt even more sweet knowing it was at home in front of the Heinz Field crowd on the night when they honored the greatest Steeler ever, when they retired Mean Joe Greene’s No. 75 at halftime.

“To do it on primetime, at night against a division opponent on Joe Greene night, how much more special does it get?” Roethlisberger said. “To see all of those towels waving and the energy that came out of that stadium. To be able to win for the fans and make it just an extra special night was awesome.”

Roethlisberger told the guys he was disappointed only in the fact that since the ceremony was at halftime he didn’t get to see much of it, but did take the opportunity to congratulate Greene and ask him to sign his program that featured the legendary Steeler on the cover.

The Steelers offensive outburst over the past three games (scoring 124 points) may have silenced those fans and members of the media who were calling for offensive coordinator Todd Haley to be fired.

“I said it after last week and I will say it again this week. I thought he called a great game,” Roethlisberger said. “We’ve all worked well together. You look at things like taking ego off the table. The play right before the touchdown to Marcus, you know I go over to the sideline and he’s, ‘Hey, Ben what do you like here? What do you want to do?’ And I told him what play I wanted, and he said good let’s do it. To check his ego I think speaks volume to him and I’m just excited we can silence the critics a little bit, and like you say, get them off his back a little because we’ve been playing good games but he has been calling good games.”

Ben said the play calling has been so effective over the past few games they have not needed to run any no huddle plays. He said the plan has been to do whatever they can to possess the ball and keep it away from the other offenses and give their defense a rest.

Speaking of defense, Ben tells the guys that the defense came up huge against the Ravens and it was on the offense to make sure they took advantage of the opportunities that the defense provided them and they did.

The score may not have looked like a typical Steelers-Ravens game, but it was a chippy like one, and Ben said Ravens linebacker Terrell Suggs was right in the middle of it, but he talked with Suggs and both agreed they were fine with it as long as it was kept clean and there were no dirty hits. 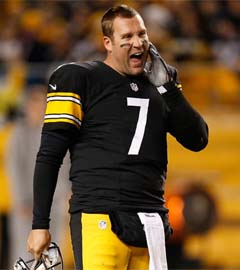 Ben did take a nice blow to the jaw from Courtney Upshaw that provided some fun from the fans comparing Ben to Popeye after making some unusual faces to loosen up his jaw.

“You know what as soon as the game was over and my wife, friends, and family were telling me about the TV showing my face I knew right away there was going to be a lot of funny things going on so I guess I can laugh at it since we won so it’s not so bad,” Roethlisberger said. “I just wanted to move it around and make sure that my jaw was in one piece, and obviously, it made for some fun for people on the Internet.”

So, does Ben think that his play over the past two weeks has put him into a possible MVP discussion?

“It’s on to the Jets,” Roethlisberger said. “It’s something at the end of the season we can look back on it and talk about it and think about it, but for me, like I said, it’s back to reality.”

Ben said the focus is on continuing to win games. He said there is no time to sit and dwell on individual stats or records. It’s about moving forward as a team and getting better each week so they can reach the ultimate goal.
The Steelers may be looking at a trap game this Sunday when they travel to MetLife Stadium to take on the New York Jets who are (1-8) on the season.

“Were going on the road playing a good defense, and it’s an AFC game and we need to go on the road and get an AFC win,” Roethlisberger said. “We’re looking at this like it’s the biggest game of the year because it is. This is the next one up. We need to give it everything we have ‘cause this is a better football team than the record shows, and as we all know it’s any given Sunday in this league. We got to be prepared to give it everything we have.”


You can read more & check out the podcast (link at the bottom of the page) here.

You can also watch & listen to Ben’s interview with the media today (video) here.