“I think I’m proudest of the offense as a whole. I got up in front of the offense at training camp and said why not us? Why can’t the offense be the reason that we have success this year? We had a lot of young guys this year that stepped up and we became one of the best offenses in the NFL.”

A re-cap from CBS Pittsburgh: 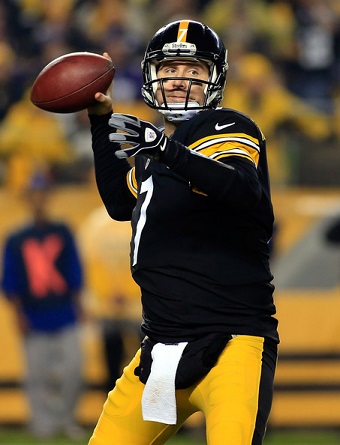 Coming off the Steelers 30-17 playoff loss at the hands of the Baltimore Ravens, quarterback Ben Roethlisberger joined “The Cook and Poni Show” for his weekly “Ben Roethlisberger Show” in which he recapped the loss, the season as a whole and talked about his future with the Steelers as he enters the offseason with just one year remaining on his contract.

Things opened up with Roethlisberger first addressing the rumors circulating that he suffered a concussion late in the game against the Ravens.

“No, and we’ve got the best doctors in the world,” Roethlisberger told us. “Us players, we are honest with our doctors, and they are the ones that determine, along with us, if we are ok to go back in the game and like I said afterwards, it was more about my neck and a whiplash effect than it was a concussion.”

Looking back on the game overall, Roethlisberger talked about where it got away from them.

“They’re a good football team, and we didn’t make the plays from the quarterback to the running back, receivers, tight end, O-line, coaches. That was a team loss and we all take that and we all take ownership in it,” he said.

It was obvious watching the game that the offense was lacking without All-Pro running back Le’Veon Bell. Roethlisberger discussed just how much his presence was missed.

“He’s first team All-Pro. Any time you don’t have a guy like that out there and what he has brought to this team and this offense this year, you miss him. But, I also don’t want to take anything away from what the guys did that were out there. I thought they stepped up and did what they had to do. But, to answer your question, we missed him, he’s one of the best in the NFL.

Talking about the season as a whole, Roethlisberger was asked if he would consider it a success despite the organization’s stated goal to win a Super Bowl every year.

“Obviously, we’re disappointed. I’ve been doing this long enough now that I think I can compartmentalize the frustration, the anger of losing, but also being able to look at the positives of the seasons,” Roethlisberger said. “So, this is still going to sting for me for a while, but I also look at how we were 8-8 the last two years and didn’t make the playoffs to a team this year, that I think coming into the year, everyone knew that we were a young team. I think that a lot of people outside our building didn’t even think we’d get to 8-8, maybe 9-7, no way make the playoffs. For us to go 11-5, win the AFC North, which is arguably the best division in football since three teams from it went to the playoffs, we won the North, we made the playoffs. I feel like we made steps this year. I think if you look at where we were the last two years to where we’ve come this year with a young team and with injuries on defense and things like that, I think you have to be even somewhere in your heart or your head, even though it stings for everybody, somewhere you kind of have to be a little bit pleased with the way the season went this year.”

The offense did come up short in some ways this year, particularly in the red zone, and Roethlisberger listed that as the number one thing the offense will need to work on for next year.

“I think we need to get better in the red zone,” Ben said. “Whatever that is, whether it’s not turning the ball over, whether it’s play selection, executing the plays that are selected, whatever it is, that’s what the offseason is for – determining where we came up short.”

Another thing the team will have to do this offseason is deal with the potential losses of some of their key veteran players including guys like Troy Polamalu, Ike Taylor, Brett Keisel and James Harrison.

“Honestly, I’m trying not to think about it,” Roethlisberger said. “I’d like to think that everyone is going to be back and I know the reality of this business, and it is that, a business, is that our team will not be the exact same next year. If it is the end of any of those four guys, I will truly cherish the time I got to spend with them and be their teammate and they’ll always be brothers.”

Ben shared his thoughts on his health and how badly he wants to remain here since he feels like he still has so much left to give.

“This is as healthy exiting a season as I’ve felt. I felt as healthy throughout the season just because of the offseason work I put in last offseason and I plan on doing that again this year. I feel great. I felt great all year, and we’ll continue to do that. Ultimately, it’s up to the representation and the Rooney family to do something hopefully this offseason and hopefully sooner than later because I love being here with this family.”

The show wrapped up with Ben talking about whether or not he’ll play in the Pro Bowl and thanking all the fans that tuned into his show throughout the season.


You can read the full re-cap here.