“To me, he’s the best quarterback in the league and he’s done it for a long time. That’s no disrespect to some of these other guys that are doing some amazing things in the NFL right now. But to me, it’s about wins and championships — and he’s got more championships than anybody.” — Ben on Tom Brady, today on his show. 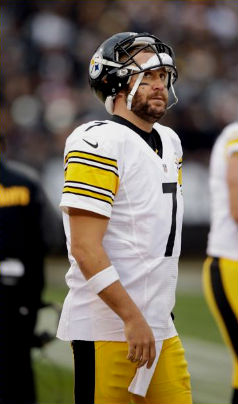 Roethlisberger is not pleased to see the momentum from their two-game winning streak slip away in a 21-18 loss to the Oakland Raiders.

“We knew we dug ourselves a hole, and we were starting to make our way out it,” he says. “Then some dirt started to come back down on us. It’s frustrating because we wanted to stack some wins and get this ship turned around. Not saying we still can’t.”

Steelers receiver Antonio Brown dropped two balls, one that would have converted a third-and-long and another that was intercepted. Ben reveals that he had a talk with Brown after the game.

“I know that he gets frustrated a lot on the sideline, and that’s fine,” Ben says of Brown. “But, I said if you’re going to get frustrated and upset, you need to make the big plays when we need you to. I’m going to hold you to a higher standard because we expect you to, and we’ve seen you make those plays before.”

“It seems like our offensive line gets hurt more than any other team’s, and I don’t know why,” he says. “It’s just freaky, crazy things. Is it bad luck? Seems like it happens all the time. I’ll go in tomorrow and find out who’s healthy enough to go this week and move on from there.”

Ben also weighs in on the state of the Steelers’ running game, the health of Heath Miller, reveals whether the time difference was a factor in the loss to Oakland, and tells why he thinks Tom Brady is the best quarterback in the NFL.


For those thoughts, listen to the entire interview here (bottom of page).