Proud to be a Steelers fan!

Home/News/Proud to be a Steelers fan!
Previous Next

Proud to be a Steelers fan!

“A few more players passed by and out hobbled Big Ben. Ben had several people around him but #7 always keeps his eyes down field looking for an open Steeler and Raymond didn’t disappoint!”

Ryan ReBell wanted to publicly thank Lamar Woodley, Coach Todd Haley, and a “dinged up” Big Ben for taking the time after yesterday’s tough loss to make a little fan’s day (not to mention a big fan’s too!): 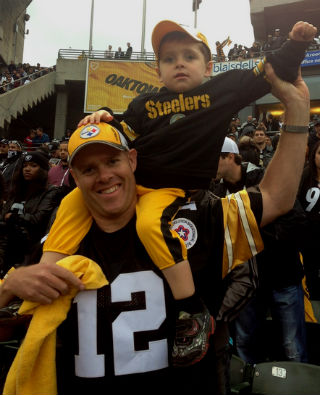 Yesterday was a monumental day and really a dream come true for me to take my son Raymond to his first Steelers game. Even though he is only 3-years old, I felt he was ready because I would frequently catch him arguing the Steelers superiority with neighbors, friends, uncles (moms side) and anybody with a converse opinion.

We purposely arrived at the game a little late because as any parent can tell you a 3-year old’s “window” is only open so long. Ray was so excited he skipped his nap because he wanted to see “the same Steelers we watch on TV”!


To the Raider fan’s credit, they pretty much all cleaned up their act at the first glimpse they caught of Ray. We were seated in an all Raider section 20 some rows up from the field and they made a consorted effort to watch the profanity….. A task too steep for daddy during moments in the game!

After the game, Ray assumed our Steelers had won because everybody was happy (he can’t fathom not rooting for the Steelers). Being that it was his first game, Daddy didn’t feel the need to correct him! It was a long day for me, having to watch my beloved Steelers lose and tote around my precious cargo, so I was ready to hit the road. Of course I was powerless at Ray’s request of “Daddy, I want to see the Steelers closer!!”

We made our way to where the team exits the locker room to board the buses. We kneeled down so I could point out all the different players to Ray. The first player to spot us was Lamar Woodley. He came right over with a gregarious smile because Ray was dressed for action and insisted on keeping his Steelers helmet on, something that Lamar obviously respected. Mr. Woodley caught us off guard, we weren’t expecting an actual encounter so we were like a couple of deer in the head lights! He shook our hands and I think “Daddy” was guilty of being even more excited that Raymond! 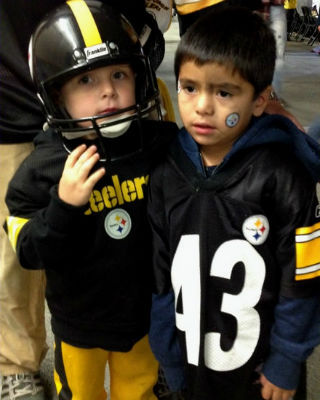 We watched several of our other favorites pass by before Todd Haley noticed Ray dressed to play. I couldn’t believe how nice Coach Haley was, as he stopped what he was doing to visit with Ray and me for a few minutes. Again caught off guard, I couldn’t even think of Todd’s name so I introduced him to Ray as “Coach”! He inquired as to how a Steelers fan made his way all the way over to California. I explained to Todd about my mom being from North Park (I botched another one, she’s from North Hills). Coach Haley apologized for the team not winning Ray’s first Steeler game and it was clear than he genuinely meant it.


A few more players passed by and out hobbled Big Ben. Ben had several people around him but #7 always keeps his eyes down field looking for an open Steeler and Raymond didn’t disappoint! Ben executed a few moves around the others and bee-lined right over to a couple of his biggest fans. He noticed Ray in full gear and asked him, “Were you out there blocking for me today?!”

Regrettably, I didn’t want to impose on Ben for a picture because he looked a little dinged up, and I didn’t want him kneeling down or worse lifting my 45lb future Steeler. Besides we were both too busy giving him our ‘deer in the headlights’ routine! Ben shook both of our hands before returning back to his original route.

I don’t think I was star struck as much as I was overwhelmingly excited that these guys would take the time, to go out of their way, to say ‘hello’ to a wide-eyed little boy in a Steeler helmet. Especially after suffering a loss, which I believe reveals true character. It makes me proud to be a Steeler fan and reaffirms our family culture of Steeler Nation (even on the West Coast)!

When we got home, Raymond ran into his mother’s arms and said “Mommy, I met Big Ben”! Heartwarming would be an understatement, and the true highlight of my day!


Thank you so much to Ryan and Raymond for sharing your story!


*Raymond poses (in helmet) in the second photo with his new friend, Matthew Herrere, who attended the game with his daddy, Phil!