“For me it’s just about focusing on our team, on me, our players, and what we have here in Pittsburgh. I’m not going to get caught up in things going on in other cities and with other players because that takes away from us, and what we have to do to be the best football team we can be…I’m trying to be the best Pittsburgh Steeler and representative for Pittsburgh that I can be, to make my team proud, our owners, our fans. For me it’s all about how can I be the best I can be for my family – to my kids, to my wife – because that’s what I want to do, be the best football player I can be, but I also want to be the best husband and father I can be.” — Ben, on his mindset when asked about all of the recent NFL news and distractions.

Ben joined The Cook and Poni Show on Tuesday for his weekly appearance on the #1 Cochran Ben Roethlisberger Show: 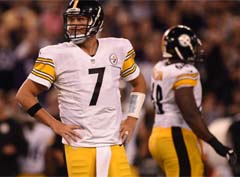 He looked back at a disappointing Week 2 performance last Thursday at Baltimore and he is still hurting from it.

Ben took a severe hit early in the game from Courtney Upshaw that he said may have been one of the hardest hits he has ever taken. Maybe a close second to the one Bart Scott put on him in Baltimore in 2006.

“I’m hurting today as much as I was at any point I can think of in the last year. I lost my breath instantly and remember hitting the ground thinking, ‘Boy, that hurt a lot.’ I kind of pride myself on not taking those big hits, but I sure as heck didn’t see it coming.”

Ben said that having wide receiver Lance Moore back this week will give them options in a four wide receiver package, and that they will also try to work some new players into the mix, saying that the offense they want to be is the one they were in the first half against the Cleveland Browns.

“It’s no time to panic. It’s a time to focus and to make plays and play better football.”

When asked if he sensed a “level of worry” from the younger players, he said he did not, but that it’s up to him and the other veterans on the team to make sure that they continue to keep the focus on getting better.

“It’s nothing to be scared about. It’s a miscommunication here and there not something we have to go back to the drawing board about and need to fix.”


You can listen to his show here (podcast link is at the bottom of the page).