Wednesday: Talking with the media

Home/News/Wednesday: Talking with the media
Previous Next

Wednesday: Talking with the media

“Well just that. He was my first quarterback coach in the NFL and I learned a lot from him. We still keep in touch and we still hang out because he’s a good guy. He understands the game of football, too. He’s got a lot of stories and a lot of understanding of this game and so anytime you can be around someone and just absorb some of the things that they’ve been through I think it just makes you a better person and player.” — Ben, on what Mark Whipple meant to him as his first quarterback coach in the NFL. 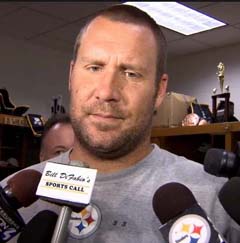 How are you feeling?


Are there any effects from the Baltimore game?

Yeah, but it’s football. You’re always going to be sore. I’ll let you guys know when there is a week that I’m not sore from the game.


Did that hit affect your accuracy during the game?

Who knows? I’m not going to make excuses. I didn’t play well enough, whether it was from a hit or just not playing good. I know it hurt.


What has happened since the offense’s success the first half against Cleveland?

We played a good team on the road (in) a hostile environment. We just made one mistake here, one there. I don’t think there are any big, glaring issues. No panic from us. It doesn’t get any easier this week playing one of the best defenses in the NFL. We just have to continue to get better and take what defenses give us.

It’s hard to find a weakness in their defense in general. As I talked to the Carolina media, to give them credit, they don’t do a lot of things crazy. It’s not a lot of exotic blitzes (and) moving guys around doing things. Because they count on their guys just to whoop you and that’s their front four, which is kind of a front-seven, eight or nine because they rotate so many guys. (They are a defense) that always stays fresh and always goes hard so it’s definitely going to be a challenge for our offensive line but I know they’re excited for that challenge.


Do you talk with your offensive lineman and have you spoken with Marcus Gilbert because he struggled last week?

No, I’m not going to do anything out of the ordinary. I talk to those guys all of the time anyway. I think being a leader, the fun part about it is knowing how to lead each individual and each individual is different. I’ve said this many times, however you approach them. I’ve talked to him, I’ve talked to the other guys but it’s no different than I normally would do. I think Marcus is one of those guys, just like the rest of the line that put more on themselves than any pressure anybody else can put on them. They feel worse about having a bad game than anybody so you don’t have to say too much to them. I know the person he is and the competitor he is. He is going to come out and be ready to play.


Do you see any similarities between your game and Cam Newton’s game?

He’s a lot better athlete than I am. He can throw it further than I can. So I don’t know where the comparisons are. I guess they just say because he’s big, and he’s bigger than me too. So I guess I’ll take that as a compliment that coaches compare me to him (laughing).


You can read the rest and watch the video of his interview here.