A chance meeting in Scotland

A chance meeting in Scotland

“That man looks so familiar. It can’t be him can it? Ben Roethlisberger, here, at my work? Thousands of miles away from Pittsburgh? Nah, it can’t be!”— Chris McLaughlin 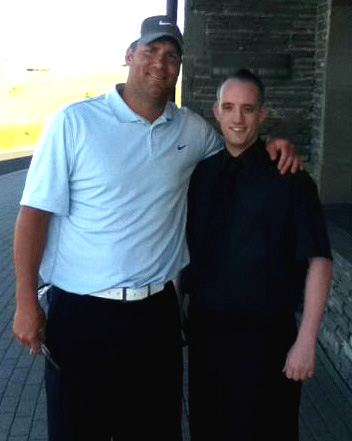 My day started like any other day. It was a beautiful day, much different than the previous 4 days of torrential rain. As I was standing at the front of the restaurant waiting to seat guests, I noticed four very tall gentlemen approaching. I greeted them, they asked for a table.

From this point onwards, my whole day changed, and even now, I cannot quite believe it.

I’m 24 years old, and for as long as I can remember, I have loved Titans Football. I’ve lived in the UK all my life and only visited the United States once a year. Living in the UK, football isn’t a very big thing. It’s gaining a big reputation, but it will never be as big as soccer. At work, I am the only person who knows anything to do with football. So for my day to take the path it took, well it’s almost unbelievable.

His response? “I get that a lot”.  Right there I knew it was him.

Meeting Ben really made my day worth remembering. I don’t know how many times my colleagues had been told that he is a 2-time Super Bowl champion and 2-time Pro Bowler. I must have driven them crazy. Put it this way: If they didn’t know who Ben Roethlisberger is, they know a lot more about Ben Roethlisberger now than they used to.


Thank you for sharing your story, Chris!


You can see more fan photos and stories here.