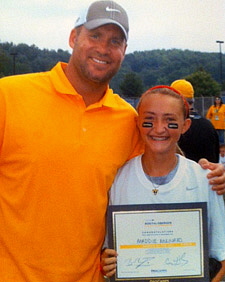 “Maddie wears a bracelet and necklace with Ben’s jersey on them.  She takes a ‘Ben’ doll on softball road trips with her travel softball team, she wants to play softball at Miami of Ohio, so I guess you can say she is a little over-the-top about Ben.

“If she could have a perfect day it would have had to have been Monday. She got to hug Ben twice…she got to talk to him…she won camper of the day…and won an autographed jersey from Ben.  I am not sure she will come down out of the clouds for a while!  The camp was great and I could see how into it Ben was and how much all of the kids enjoyed it…but Ben taking that moment to let Maddie know that he remembered her from last year truly meant the world to her!” — Joe Mulinaro, IN


“We took our granddaughter, age 12, and our grandson, age 7, to Ben’s Youth Camp. What organized chaos! It was an awesome experience for both. Both caught Ben’s passes. They talked about the camp all the way back to Northern Ohio. They have already decided to come back next year, at our expense! We also really enjoyed the experience!” — Linda Hawk, Ohio


“Jonathan had a blast and will be back next year. I am VERY impressed with the camp. My stepmother actually got to tell Ben that her grandson won the contest. I actually had the opportunity to tell Ben thanks myself; he is a great guy. Ben told Jonathan, ‘nice catch!’ and it made his day!” — William Porter, PA


“Ben gave out a special award in honor of his college coach, Terry Hoeppner, to a little boy that was hit in the eye with one of Ben’s passes during their championship game yesterday – which ended in a black and blue eye. Ben told the crowd that the young man was hit with the ball, but kept right on playing…never even hesitated to keep pushing. I was watching the game and the boy did grab his eye, but went right back to the line for the next pass. Ben said he wasn’t sure who was going to get the award, but as soon as that happened he knew it was going to be that little boy. He said of all the awards handed out that award means the most to him. And when he gave the little boy the award, he also gave him a bag of ice for his eye, lol.” — Michele Rodi, Ohio


“My son Christian had the time of his life at your camp. You threw him a pass and I managed to get the shot on my camera. What a memory. Awesome two days. Thanks so much, Ben!!!” — Kris Bober, PA 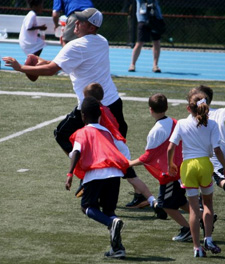 “We just got back from Ben’s camp in Harmony, PA. It was truly amazing! Still in awe right now, actually. I just can’t believe someone of Ben’s fame or standing was so attentive. He never seemed to take a break and was always on the field. Then throwing 487 passes so EVERY kid had the opportunity to catch one from him? I doubt anyone else does that. I was fortunate enough that not only did Bryce catch his pass, but I was able to catch the entire thing on video. Something he, WE, will always look back on as a great memory.

“But I have to say that the one thing that impressed me the most was about someone else’s kid. It was one of the younger kids who seemed to be having a difficult time emotionally. Don’t know what was wrong, but he would not get off the ground. He wasn’t hurt. It was Ben who picked him up and walked him over to the sideline, got him a drink of water, and sat there and talked with this kid for several minutes. Not because any cameras were around, but because he seemed genuinely concerned. The graciousness not only came from Ben, but his sister as well. Carlee was there to help out some of the kids with putting pinnies on. But she was more than accommodating taking a picture with me when I asked her.

“We are getting spoiled here lately. First, Ben’s show in Virginia back in April. Now this……..I just can’t say enough about how amazing Ben is. Not just as a football player, but as a human being. His soon-to-be-born son will be one lucky kid.” — Steve Bishop, NY


You can see their photos here (pages 1 through 6).