From Bob Labriola’s Q&A on Steelers.com:

You just have to know where to go!

MELVIN GIBBONS FROM WASILLA, AK: We’ve not seen anything on television about Ben Roethlisberger, and when do the Steelers play their first game?

BOB: If you’re looking for information on Ben Roethlisberger, I would suggest Steelers.com, where there are stories, videos, and Zoom interviews available that chronicle him and the team from the time training camp opened in late July. As of now, and things could change, the Steelers regular season opener is at 7:15 p.m. on Monday, Sept. 14 at the New York Giants.


All indications point to….

MARK O’MALLEY FROM MANTUA, OH: JuJu Smith-Schuster had a disappointing drop-off in production last year…I read he worked very hard in the offseason to gain strength and hand skills. Have you seen any indication in camp that JuJu might return to his former exciting player status?

BOB: I have seen some indications, yes. He’s wearing No. 7.

“I figured with the surgery he would come back a brand new person, and it’s definitely showing. He is throwing the ball great. He is doing everything great. In the scrimmage the other night it was nice to see the No. 7 jersey back out there.” – James Washington on Big Ben.

“The thing about Ben is he is so spontaneous. He has been doing it for so long. The experience he has, he is able to go into the game and do no-huddle and just call plays from the back of his head. Having him back is a plus for us.” – JuJu Smith-Schuster. 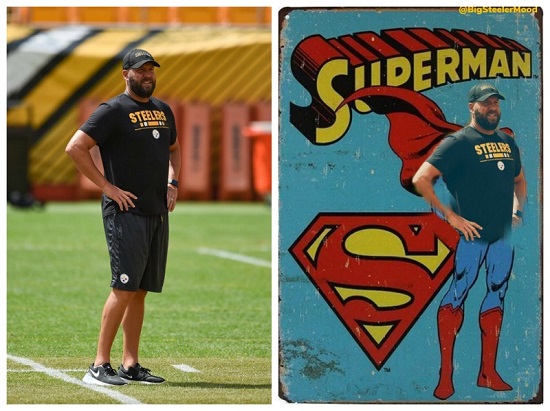 *Thanks to @BigSteelerMood for this one! Lol!