From Ron Cook at the Pittsburgh Post-Gazette this morning: 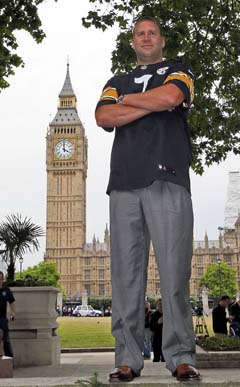 The best part about Big Ben’s visit to Big Ben last week was the picture that captured the moment for history’s sake. The photographer did a fabulous job finding just the right angle to make Steelers quarterback Ben Roethlisberger look every bit as tall as the London landmark. Roethlisberger almost seemed larger than life.

That started me thinking.

That’s how Roethlisberger must play this season if the Steelers are going to get back to the playoffs and take a run at another Super Bowl. Maybe not larger than life. But better than ever.

A lot of clubs wish they had a quarterback as good as Roethlisberger.

I learned a long time ago to never write off a team with Roethlisberger as its quarterback.

He’s good enough to cover a lot of blemishes.

It’s hard to believe Roethlisberger is 31, getting ready for his 10th NFL season. What isn’t so stunning is that he’s more interested than ever in his legacy. He has always said the only statistic that matters to him is wins. Wins and Super Bowls.

Roethlisberger already has topped Bradshaw as a quarterback for me. Bradshaw played on much stronger teams with eight other Hall of Famers. How many Hall of Fame-caliber teammates has Roethlisberger had? Jerome Bettis for two seasons? Alan Faneca for four? Hines Ward? Troy Polamalu? Maybe Maurkice Pouncey?

But it’s still fun to think about the possibility of Roethlisberger winning a third, fourth and even a fifth Lombardi Trophy.

“I’m not getting any younger, but I feel young,” he said. “I feel great. That’s still the goal and it’s got to start this year.”