Followers of both our Twitter and Facebook pages know this is a regular, weekly feature. But this week’s Throwback Thursday will be shared here as well!


“We played in a hurricane. I remember it being fast. I don’t think I read any defense all day. I just reacted to everything. It was pretty much a blur to me.” — Ben.

Ben sloshes across the wet field in a driving rainstorm produced by an outer band of Hurricane Jeanne during the game against the Miami Dolphins at Pro Player Stadium in Miami, Florida. The Steelers won 13-3. 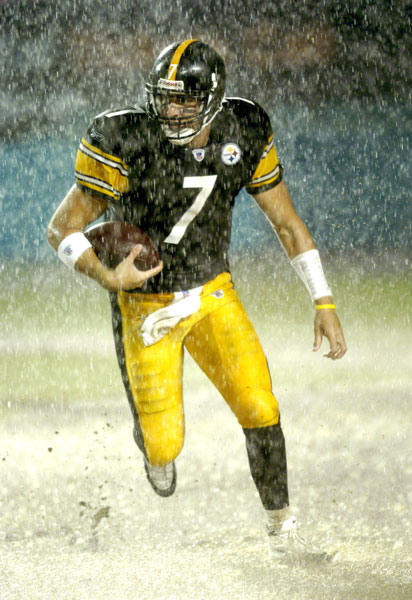 From a post-game article on SI.com:

“The weather in the first half was not conducive to doing anything,” coach Bill Cowher said. “We couldn’t even hold the ball. Both teams couldn’t throw it. But that’s the kind of football I love.”

Steelers rookie Ben Roethlisberger, making his first NFL start, had his first pass intercepted but otherwise avoided costly mistakes despite the slippery ball and footing. He finished 12-of-22 for 163 yards and one score.

“It wasn’t pretty at times, but we got the win,” Roethlisberger said.

Hines Ward made a diving catch of a pass from Roethlisberger for a 7-yard touchdown. Jeff Reed hit field goals of 40 and 51 yards, the latter coming after the Steelers stopped A.J. Feeley on a fourth-down quarterback sneak at midfield.

Announced attendance was 72,225, but with Florida just beginning to recover from its latest hurricane, the actual crowd was about 30,000. Officials decided Saturday to push the starting time back 7 1/2 hours to avoid Hurricane Jeanne, and heavy rain fell at times.

The showers left standing water in the baseball infield, which made footing especially treacherous on that part of the field. The start of the second half was delayed so the grounds crew could apply additional bags of dirt.

“That was the worst weather I ever played in,” Ward said.

The Steelers allowed just 169 yards and bruised more than just the Dolphins’ pride. A jarring tackle by Chris Hope sent running back Lamar Gordon from the game with an injured left shoulder, and his replacement, Leonard Henry, was knocked backward by a big hit from James Farrior.


You can read more from this 2004 article here.