“Every one is a must win for us, but we’d like to get a win before we go into the bye week. Might as well try and leave the country and try something.” — Ben, when asked if this weekend’s game is a “must win”. 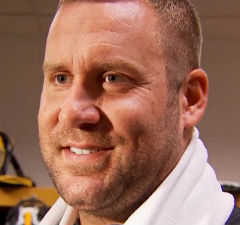 Re: The Vikings defense:

They are really good. A lot like last week’s team, they are opportunistic and ball-searching. If the defensive line isn’t getting pressure, they’re getting their hands up in the air, they’re batting them down. Similar to last week, as rushers go by, they’re trying to strip at balls. So, very similar to last week. A good test for us.


Are you excited to get Le’Veon Bell back this week?

Yeah, any time we can get weapons back on our offense we’re excited for it. We are just excited to see what he can do because no one really knows. No one has seen him in game action. Obviously, we’ve seen some great things at training camp, practice and preseason, but that’s different. Even in the preseason, he didn’t get a lot of snaps. I’m really excited to see what he’s going to bring.


How do you keep this like a regular road game? Could it be a distraction at all?

I talked to Minnesota’s media and they asked me if I would have rather gone over on Monday when Minnesota went or Thursday when we’re going, and I don’t know. I’ve been over there a couple times. I know the jet lag does get you. It’s a wasted day when you get over there because you’re so exhausted. But I know Coach wants to treat this as a business trip, so that’s why we’re going over and trying to take care of business.

I’ve heard that during games they are a little soccer crazy – the horns, the thunder sticks, just kind of making noise all the time. Not necessarily situational noise, just noise. But when I went over there I did some fan forums with some of the Steelers’ fans. There is Steelers Nation UK over there, so I got to meet them. They’re passionate. They know their stuff. I wouldn’t say they’re as knowledgeable as everyone over here because they still have a little rugby and soccer on their mind, but they genuinely are passionate for the Steelers and for NFL football over there.


When you struggle like this, for you personally, where do you draw the line between feeling you have to do too much, and maybe feeling like you can’t possibly do enough?

That was part of my frustration after the game on Monday and Tuesday. I don’t feel like I’m pressing. I don’t feel like I’m trying to do too much. I know I’ve done that. At the end of last year, I really felt like I was pressing too much and trying to do too much and put too much on my shoulders. I don’t feel like I’ve done that this year, and that’s why I’m so frustrated that things haven’t turned out the way that I’ve wanted them to. I’m just going to keep doing what I’ve been doing and not trying to overcorrect anything, be even better and eliminate all these things because I think it takes you out of your own element, your own game plan. So, I’m just going to keep doing what I do and be smart with the ball.


Is there anything you can change in terms of ball security, or were they just good plays?

No, I just think they were good plays. I looked at them, I watched it again and the first one he got out as I was bringing it to my body. He just made a good play. They’re going to happen. Just have to make sure I hold onto it.


You talked on your radio show yesterday about your linemen believing in themselves more and playing with some attitude. When you say attitude, do you mean more confidence, with more nastiness, both?

Yes, just go out and play. Be tough, be nasty. If you have to get a penalty because you’re going to be nasty, a holding penalty, or you’re going to choke someone out on a run play – I don’t think that’s always a bad thing to get a penalty every once in a while because you’re playing tough and nasty, as compared to not getting any penalties and just playing passive. It’s a fine line. I know that the offensive line coach probably didn’t want to hear me say that, but I just want them to have the confidence to go out and play the way that I know that they can, the way that they know they can.


Are fumbles any more bothersome to you than interceptions?

Yeah, probably a little bit, just because picks are kind of what a quarterback does. You throw the ball so much that it’s just going to happen. For me, when they get it out on a sack or whatever it is, that bothers me because I feel like I can do better to control that.


Your comments about Bell on your show yesterday generated some fan response and people were wondering if you were challenging him or knocking him:

About what? What part?

I just said that as – was that the one where I compared him to Heath? Oh gosh, yeah, that’s more just me knowing Heath. I meant that as a compliment to Heath and just saying that I know Heath, and I’ve been around Heath for long time. He’s the second-oldest guy on the offense after me and Jerricho. It was more just about me saying that I know Heath, and I just don’t know Le’Veon well enough yet to know. Can he play through pain? How much pain can he play through? I just don’t know him well enough. That’s all that was meant by those comments.


He said it was a fair assessment anyways.

That’s nice of him [Laughs]. I didn’t even know that it created – I’ll go say something to him and see if it hurt his feelings, but I don’t think it would have. Like I said, it was more of just a compliment to Heath and knowing Heath and a lack of knowing that guy. Next year, I’ll probably be able to talk about him better because I know him one year more.


You can watch & listen to his interview here!