“There’s no quit in this soldier. That is one of the greatest lessons war taught me, a lesson I see time and again among the thousands of our brave returning soldiers who face adversity and find the faith to grow strong in it.” — Colonel Gregory Gadson, US Army.

Followers of both our Twitter and Facebook pages know this is a regular feature. But this particular Warrior Wednesday photo and story was sent by Ben’s friend, Noah Galloway, a Warrior himself, and he asked that we share it on the site as well:

“Met with Colonel Gregory Gadson today. Colonel Gadson lost both his legs above the knee in 2007, is now the commander at Fort Belvoir, VA making him the Army’s first double amputee to command a major installation.

Colonel Gadson also has a role in the new film ‘Battleship‘.

It was truly an honor to meet such an accomplished hero. He is definitely deserving of the honor of being recognized here on a Warrior Wednesday!” — Noah Galloway 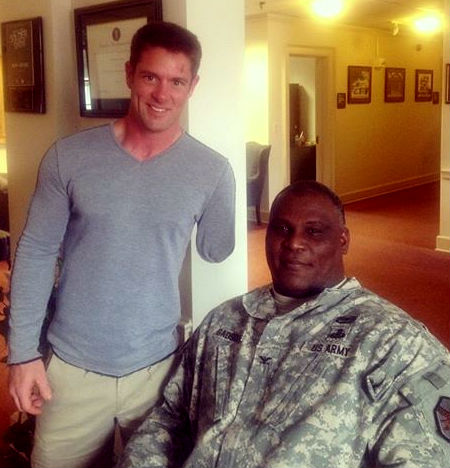 Colonel Gadson, a Chesapeake, VA native, played football for West Point between 1985 and 1988, wearing the number 98 jersey and serving as co-captain. He graduated in 1989, and holds Masters Degrees in Information Systems and Policy Management from Webster University. He is a graduate of the Command and General Staff College and the Advanced Field Artillery Officers Course and in 2010, he became an Army War College Fellow at the Institute of World Politics in Washington, D.C.

He served in the U.S. Army for more than 20 years as a field artillery officer and served on active duty for Operations Desert Shield and Desert Storm, Operation Joint Forge, Operation Enduring Freedom, and Operation Iraqi Freedom.

Colonel Gadson was commander of the 2nd Battalion, 32nd Field Artillery unit on May 7, 2007, when he lost both his legs and severely injured his right arm after the Humvee he was riding in ran over a roadside bomb in Baghdad, Iraq while returning from a memorial service for two soldiers from his brigade.


“There were four M1151 armored Humvees in our convoy, each with five soldiers. I was riding shotgun in the third Humvee. And then it happened. We ran over an object on my side of the vehicle. An IED buried under the asphalt. It happened faster than the mind can process. The flash and the boom, in that order.” — Colonel Gadson, more from his story featured in Guideposts.

He is the recipient of three Purple Hearts, three Bronze Stars, the Legion of Merit, the Meritorious Service Medal and the Army Commendation Medal.

The Colonel has been the Installation Commander at Fort Belvoir for over a year now, and oversees the well-being of more than 50,000 military employees and over 140 tenant agencies for the Department of Defense, including the National Geospatial Intelligence Agency and Washington Headquarters Services.


You can read more from Colonel Gadson’s interview here.

You can also watch this inspiring video on the Colonel here.


*Thank you Noah for sharing your photo and giving us the opportunity to honor this hero!