Last year, on September 7th, 2011, the first grant of the NFL season was awarded to the Montgomery County Sheriff’s Office, in Rockville, Maryland.

All members of the Sheriff’s Office K9 Unit are trained as dual purpose K9s for the detection of explosives as well as patrol functions. The grant added another level of safety for the canines while they handle their duties both in and around the Montgomery County area, protecting the lives and property of the citizens of Maryland and surrounding states.

Sheriff Darren M. Popkin said at the time that “the grant funds will provide our dogs with vests that protect them from attacks with firearms and knifes while engaged in their duties.”

A year later, the Sheriff’s Office sent an email to thank Ben once again for the grant:


“The Montgomery County (MD) Sheriffs Office wanted to again thank Ben Roethlisberger and bigben7.com for the support you have shown our office in the past. Last year we were able to purchase ballistic vests for all of our K9s because of your support.” — Deputy Sheriff James Johnson, Montgomery County Sheriff’s Office.

The department also sent photos and a story about “Logen”, their K9-to-be (he’s got a little growin’ up to do first!)!

Little Logen, a pure bred German Shepherd Pup, was born on April 23, 2012. His father “Leon” is a working Police dog in Maryland ,and his mother “Echo” has bred other puppies that have become successful Police and Search and Rescue dogs.

Once he is trained, Logen will be wearing a “K9 Storm” bullet proof vest and will be able to track humans and locate evidence….but first he has to get big enough to jump into the back of a police vehicle unassisted!


You can read about Logen here!


You can read more about The Ben Roethlisberger Foundation here. You’ll also find information on making a donation to the foundation!


*Thank you to the Montgomery County Sheriff’s Office and Deputy Sheriff James Johnson! 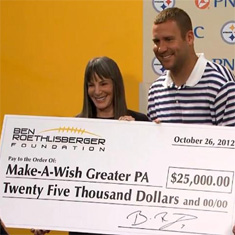 The Ben Roethlisberger Foundation donated $25,000 to the Make-A-Wish Foundation! That money will allow Make-A-Wish to grant wishes to six children!

Ben presented the check to Judith Stone (pictured), President and CEO of Make-A-Wish during an impromptu press conference this afternoon after practice.

The money was raised during The Ben Roethlisberger Foundation Invitational Golf Tournament in July.

For the past several years, Ben has devoted his time to the Make-A-Wish Foundation because of his passion to help children.


“It’s no secret how much the kids mean to me. When someone has a wish and they want to spend it with the Steelers that touches you and is special. For us to be able to do this and be able to have six kid’s wishes come true is awesome. Being there to meet them, shake their hand, sign an autograph means a lot to me.” — Ben.

One of the most memorable of these Make-A-Wish moments was when he met 14-year old Akeem Havens, who signed a contract with the Pittsburgh Steelers in May of 2008 to become one of Ben’s go-to wide receivers for the day!


You can watch video of Ben’s press conference today here.

You can also read a story about another Make-A-Wish moment today during Steelers practice here.

You can watch the video from Akeem’s day with Big Ben and the Steelers here.

You can read about more of Ben’s Make-A-Wish moments here.

The Ben Roethlisberger Foundation was featured in the evening news broadcast of a Nashville, Tennessee television station tonight.

WKRN-TV Channel 2 reported on the story of the recent grant from Ben’s foundation to the small town of Millersville and the police department’s plans for putting that grant to good use!


You can watch video of the news broadcast here, as well as read an accompanying article.