Vote for Ben and his teammates to play in the 2013 NFL Pro Bowl!!


“I want to take a second to say thank you to all the fans who voted for me and helped me get back to Hawaii for the Pro Bowl. It is an awesome honor to be voted by my peers and coaches, but even more by the fans and that’s all of you! I wouldn’t have been able to go if it weren’t for all of your votes (no matter how many times you voted, haha). I also want to say thank you for all of you who voted for my teammates, it will be awesome to throw to 2 of my receivers!” — Ben, in his thank you to the fans last year for his selection to the 2012 Pro Bowl. 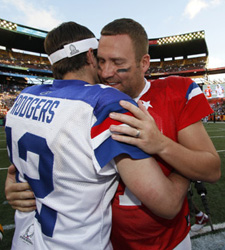 
“We’re trying to get him to the Pro Bowl. He’s deserved it for a long time. Heath is a weapon and we have to continue to use him out in the field and in the red zone. Like I’ve always said, he blocks like a lineman and catches like a receiver. If we keep utilizing him it will be big.” — Ben, on TE Heath Miller (who he is also campaigning for to be the next President of the United States) from an interview on September 19, 2012. 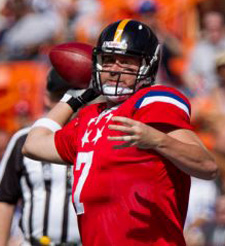 Ben sent his own photos from his trip to Hawaii! You can see them here!

Ben also posed with fans, including Julian Kinard, brothers Danny and John Trower at a luau, Kayla Michelle in front of the Marriott Ihilani resort, and military personnel who came out to watch practice one morning!