A tribute to Pearl

Home/News/A tribute to Pearl
Previous Next

A tribute to Pearl

Steeler Nation lost a beautiful fan on earth when Pearl Sirota passed away last month. But she will still be cheering on “her” Ben in Heaven during football season! 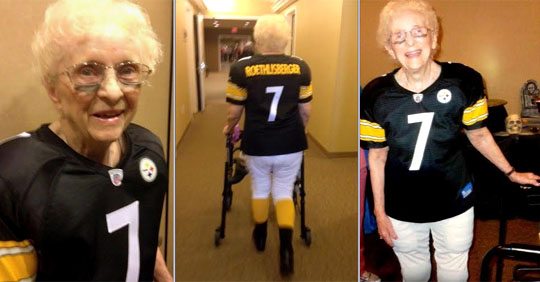 Regular readers to Ben’s website may remember Pearl – she was featured here in November, 2013 as a special 88th birthday present from her family:


“Pearl was born and raised in New Ken (Kensington) and moved to the Dallas, Texas area to be close to me and my sister in 2004″, says Linda. “She has remained a die-hard Steelers fan, even in the heart of ‘Cowboys country’! Each Sunday, she dons her Roethlisberger jersey and watches the game at home if it’s broadcast locally. Otherwise, Pearl and I often visit a nearby sports bar to watch the game.” — Linda Lacinski, from that post on November 26th, 2013.

We received an email from Linda recently letting us know of her mother’s passing:

One of Big Ben’s biggest fans went to heaven last month. You may remember our special story on Big Ben’s site in November of 2013 to help my mother, Pearl Sirota, celebrate her 88th birthday.

At the visitation at the funeral home, I had several people ask about her post on Ben’s site. Steelers fans are something special.

Pearl loved spending time with her family, whether it was a simple backyard cookout, a large family Thanksgiving dinner, or a special occasion like a Steeler football game.

Pearl donned her #7 jersey and positioned herself in front of her TV for every game she could while living in the Dallas, Texas area. A few local sports bars welcomed Pearl when games weren’t broadcast nationally.

She was the cutest Big Ben fan in the place!

While she may now be in heaven with her husband of 55 years, you can be sure she’s already requested a front row seat to see Big Ben and the rest of the Steelers take on the Patriots in the first game of the season.

She’ll be wearing her #7 jersey that she took with her (upon her request, we placed her favorite jersey in her casket to take with her to heaven), as well as her beautiful smile.

Pearl was a kind, thoughtful, and fun mother, grandmother, great-grandmother, aunt, cousin and friend to many. She will be missed. 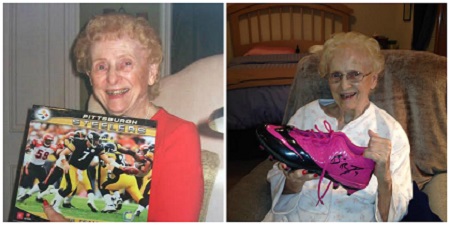