A true hero and inspiration at Steelers Training Camp this weekend

A true hero and inspiration at Steelers Training Camp this weekend 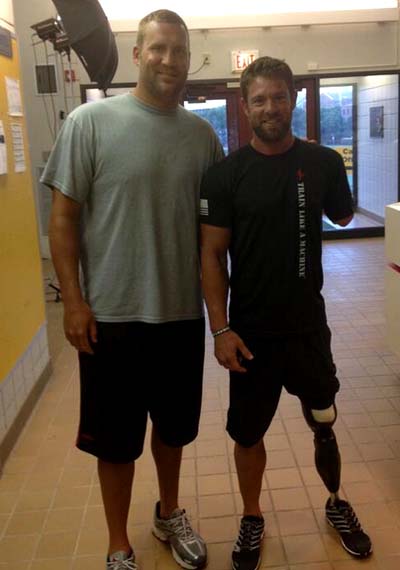 So honored and blessed to have my good friend Noah at training camp these last couple days! It was great to spend some time and talk and share stories with Noah. He spoke to the team tonight and it was awesome – everyone really enjoyed it. We are so blessed to play a game that we love and we owe all the troops all over the world a huge thank you for all your service. — Ben

Jonathan Dwyer @JDwyer27
It was an honor to meet you @Noah_Galloway amazing story true testimony of strength faith and dedication very inspirational. ‪#‎Blessed‬

Brett Keisel @bkeisel99
What an inspiration @Noah_Galloway is! Thank you for sharing your story with our team.

Mike Tomlin ‏@CoachTomlin
Honored to have Noah Galloway an American hero spend the weekend with us. Thank you all members of our Armed Forces.

As regular readers already know, Noah is no stranger to Ben’s website!

Noah first shared his story with the website in 2012.

He had his photo taken with Ben after the two met in the airport in March of 2012 and shared it on Twitter:

“It’s a great feeling when Roethlisberger introduces himself to you and thanks you for your service. Great guy! It was incredible to have him come up to me…I really appreciated it!”

Noah had just completed the White Sands Missile Range 23rd Annual Bataan Memorial Death March in New Mexico, and was on his way home to Alabama when he met Ben in the airport. Noah and his team, TEAM X-T.R.E.M.E completed the 26.2 mile march wearing 47lb packs and gas masks.

His photo with Ben was also featured as the website’s Photo of the Week in November during Veterans Day week to coincide with Ben’s Salute to our Troops tribute!

Not only did Noah and Ben become friends after their chance meeting, but Noah hasn’t stopped moving since that March in March:


Noah is determined to inspire others by his actions, by training like a machine and demonstrating that challenges are meant to be conquered no matter how big they might be.

You can try and keep up with the amazing Noah on his Facebook page here!


*Thank you once again to Mr. Lauten at the Steelers, for the photo!