“We called a play to get some crossing stuff, and they did a good job getting me out of the pocket, so was just kinda trying to keep the play alive. I knew AB was coming across the field, and I think it was Houston that dropped underneath him and AB went behind him. Really, it was about letting him clear and just putting the ball on him and just let him make the play. I’m sure that play won’t make SportsCenter or make all of the highlights, but talk to the guys in that locker room and that was probably one of the biggest plays of the game.” — Ben, on the play to end the game. 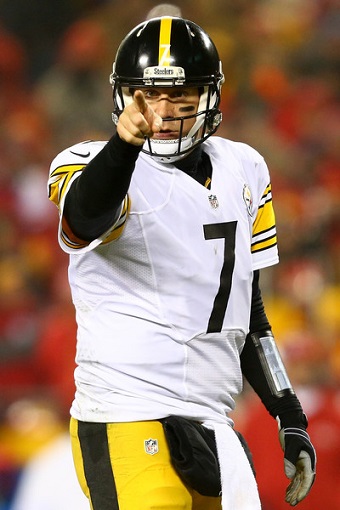 Ben Roethlisberger seemingly disappeared in the Arrowhead fog as he rolled to his right with two Chiefs defenders surging. His favorite target, Antonio Brown, burst from the left side of the formation into a juke-filled crossing route, and into the Kansas City night.

The throw on third-and-4 with 2 minutes left, the Kansas City Chiefs out of timeouts, sealed the AFC divisional playoff but also stayed true to the Steelers’ entire evening, or the last two months.

They took blow after blow but never broke.

“This team is strong,” said center Maurkice Pouncey of the Steelers, winners of nine straight.

The Steelers were practically allergic to touchdowns Sunday, powered by Chris Boswell’s leg in an MVP performance for kickers. His six field goals set a postseason record.

The Chiefs kept coming in the fourth quarter, driving 75 yards for a touchdown over more than seven minutes of game clock.

Then the defense stood up like it had all game.

With the Chiefs lined up for a two-point conversion to tie the game, the Steelers showed a resolve that drove them the past two months. James Harrison, doing the unthinkable at age 38 with a sack and many other pressures Sunday, beat Eric Fisher off the edge once again, drawing a holding penalty to negate a two-point score. Then, safety Sean Davis — the culprit on a helmet shot on receiver Chris Conley to keep a tired Steelers defense on the field — soared over the middle of the field to knock down an Alex Smith pass in the back of the end zone.

This was a grind-it-out win all the way, with Le’Veon Bell running wild for 170 yards and Harrison’s defense turning a hot Chiefs offense lukewarm.

The Steelers’ offense resided in scoring territory all night, reaching the red zone four times and the Chiefs’ 25-yard line or closer seven times thanks to a nearly 400-yard attack. It scored no touchdowns on those drives despite another dominant day from Bell. The Chiefs’ red zone defense was tremendous and the Steelers couldn’t beat it.

So the Steelers went pure survival mode, methodically moving downfield for 3s and letting the defense do the rest.

Roethlisberger said offensive coordinator Todd Haley asked him which play he liked, so the quarterback mentioned a crossing route they hadn’t run all game. Brown went behind linebacker Justin Houston and Roethlisberger put it on him.

“You want the ball in your hands,” Roethlisberger said. “I love that situation.”

On that fourth-quarter drive, the Chiefs had as many fourth-down conversions as they did third-down conversions Sunday (two). Everything happened on that drive, from broken plays to helmet shots to several goal-line stands.


“There are a lot of things to do to be successful against them.They are the best in the world for a reason. We’ve got to score points, can’t turn the ball over.” — Ben, on the Patriots.

But the Steelers seem to understand what it takes to win in January. The defensive game plan was to limit Tyreek Hill (45 total yards), then apply enough pressure on Alex Smith that he couldn’t find tight end Travis Kelce (five catches, 77 yards).

“It was a big focus trying to prevent their playmakers from making plays and just keeping them contained,” said linebacker Bud Dupree, whose hit on Smith in the first half caused a Ryan Shazier interception.

This game was eerily similar to their Week 15 win in Cincinnati, with Boswell also connecting on six field goals.

And now it’s on to New England.

“These are the two best teams in the AFC,” said Bell about the Steelers and Patriots for the AFC title. “It should be a showdown.”


*The Steelers will play the New England Patriots on Sunday, January 22nd at Gillette Stadium. Kickoff for the game is set for 6:40 p.m. ET. The game will be televised on CBS (KDKA-TV).