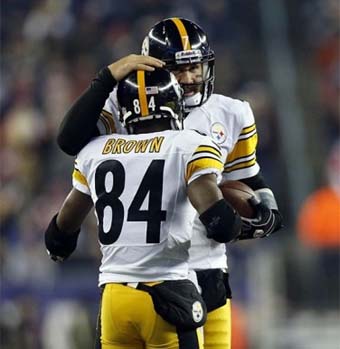 The Pittsburgh Steelers beat the Chiefs last week 18-16 to advance to the AFC Championship game, but it was a postgame locker room video shot by Antonio Brown that has grabbed the headlines.

Quarterback Ben Roethlisberger joined The Cook and Poni Show for his weekly spot on the #1 Cochran Ben Roethlisberger Show and shared with the guys his thoughts on Brown doing a Facebook Live video of the post game message from head coach Mike Tomlin.

“It’s an unfortunate situation that we’ve got to deal with right now,” Ben told us. “That’s a sacred place where things are said and hugs and tears, and it’s kind of a special place. So a little disappointed with AB for that. Coach talks and then I talk, and you just don’t want everyone to know what’s going on in there with the family. And also, I wish AB would have been listening to Coach and myself instead of being on the other side of the locker room filming.”

Ben went on to say that he’ll talk to Brown, but it won’t be a big deal.

“I’ll talk to AB, but like I said, it’s not like it needs to be addressed in front of the team by me or anything, that’s coach’s job. He’s the boss, he’ll address it however he feels appropriate. It’ll be water under the bridge here for me right now as soon as we’re done talking about it.”

Looking at what took place on the field last week, Ben talked about his 20 of 31 performance for 224 yards and no touchdowns and how he thought the offense performance as a unit. 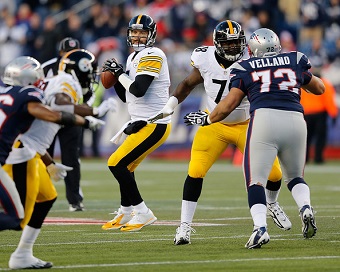 Now looking ahead to next week in the AFC Championship game, Ben discussed what it’s like facing a Bill Belichick defense.

“It’s tough. It’s just like playing a Bill Belichick team. His hand prints, his fingerprints, are all over that whole team, all three phases. They often out-coach their opponents. When you’re playing a defense like that, you have to be prepared for everything.”

All that being said, Ben was asked if fans should feel good about their teams chances of having to get through the Patriots at Foxborough.

“It’s not an easy place to play and, like I said, you’ve got one of the best quarterbacks to ever play the game and probably one of the best coaches to ever coach the game, that’s a tough recipe to go into an away environment and beat.” Ben added that “to get where we want to go, we have to go into the lions den and slay the dragon.”

“I think this team has confidence, its got a group of young guys that are playing well, its got some veteran guys that have been-there-kind-of-done-that type thing. It’s a fun team, I’ve enjoyed being around this team. Like you’ve said, we’ve had our ups and our downs, but we’ve been able to persevere.”