Now it’s on to Kansas City! 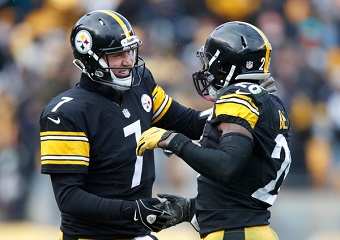 Ben Roethlisberger came out firing against the Dolphins, completing his first 11 passes, including two long touchdowns to Antonio Brown on the first two drives, one for 50 yards and one for 62 yards, in a 30-12 win over the Miami Dolphins in the AFC Wild Card Round.

Roethlisberger finished the day completing 13 of 18 passes for 197 yards and the two touchdowns, and said the plan was to open the game passing the ball and then let that open up the run game.

“We started the game off throwing the ball,” said Roethlisberger. “That created the open running game. We’ve gone into games where we’ve run it to throw. This game we came out throwing to run. We had a mindset on the third series we were going to go to the jumbo and bring in the extra lineman, (Chris) Hubbard, and we were going to run on four straight downs if we had to.

“You’ve got to do what’s best for the team. The running game opened up and worked.”

Roethlisberger said he injured his ankle on the second to the last snap of the game, but plans to be ready to go next week when the Steelers play the Kansas City Chiefs in the AFC Divisional Round.

“I don’t know anything yet, but we will find out soon,” said Roethlisberger. “You always worry about being hurt, but I will be out there next week.”

Le’Veon Bell made his first-ever postseason game a memorable one when he carried the ball 29 times for 167 yards and two touchdowns.

“I think the offensive line did an incredible job of controlling the line of scrimmage,” said Bell. “It made my job real easy. The receivers on the edge, getting on their defensive backs and the safeties, and Ben (Roethlisberger) putting us in the right situation. It was a total team effort today. I was trying to run hard and get what I could.”


You can read more from Ms. Varley’s post-game report here.

You can watch all the game highlights here.

And, you can check out a few game photos here.