Home/News/After the game…
Previous Next

“I was shocked. It was the end of the quarter and he said I was done. I still wanted to go in, but he wasn’t going to have it.” — Ben, on Coach Tomlin’s decision to take him out of last night’s game at the start of the second quarter. 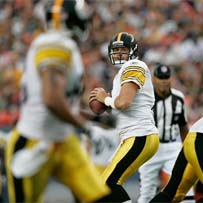 Ben drops back to pass against the Denver Broncos. Photo: Getty ImagesHe was booed loudly when the Steelers’ offense took the field for the first time.

He responded by completing his first pass on the first play of scrimmage, 47 yards to Mike Wallace and finished after 11 snaps with 4 completions in 6 attempts for 67 yards.

His first series ended in a 33-yard field goal by Jeff Reed.

Roethlisberger also guided the first-team offense to three points during 20 snaps against the Giants.

“I thought he was sharp,” Tomlin said. “He moved the ball and did some nice things.”

Roethlisberger was yanked in the middle of Pittsburgh’s second series after the Steelers had gained 97 yards on 11 plays.

Tomlin had some evaluation to do.

Dennis Dixon has started only one NFL game, and he is expected to be Byron Leftwich’s backup when the season starts and Roethlisberger’s suspension begins. So, he got his first significant playing time with the starters.

Dixon finished 9 of 16 for 94 yards, two interceptions and a pair of sacks by Robert Ayers.

According to FOX Sports just prior to the game, Ben will learn sometime after the final exhibition game Thursday if his six-game suspension will be reduced to four games.

NFL spokesman Greg Aiello confirmed that commissioner Roger Goodell will meet with Ben “soon”, but declined to say when or where.

“I hope it’s a good meeting,” Roethlisberger said. “Right now it’s been all about football for me. I haven’t had time to think too much about it because I’m not really sure even when it’s going to be.

“I would just assume that I’ll sit and talk to him. We’ll have good communication and talk and find out things he has to say,” Roethlisberger said. “I’m sure he’ll want to hear what I want to say and we’ll go from there.”

When asked what he will do to stay in ‘football shape’ during his suspension, Ben said, “I’m going to keep working out and bring my quarterback coach in from California and try as often as I can to just keep the cleats on and throwing the ball.” 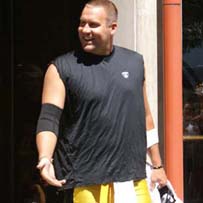 You can read post-game quotes from Ben and his teammates here.

You can watch video highlights from the game here.

*Thank you to Penny!

Ben led the Steelers to the AFC Championship Game three times in his first six seasons. He is one of only two active NFL quarterbacks to win multiple Super Bowl titles (Tom Brady is the other).

Ben joined Roger Staubach, Bernie Kosar, Tom Brady and Donovan McNabb as the only quarterbacks to lead their teams to the conference title game at least three times in their first five seasons as the starting quarterback.

You can check out more individual, team, and game stats about the Steelers here.