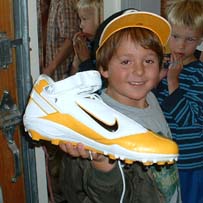 We were just at the Steelers-Broncos game in Denver and we’d like to thank Ben for tossing his shoe to us. It’s the first time I ever sat in the front row and I apprehensively bought the tickets a week before, wondering what I was doing spending so much money on a pre-season game…. Now, I know why.

This was my son’s first ever football game and I can’t tell you how exited he is to have one of Ben’s shoes (see photo above showing his fellow 1st and 2nd graders).

If we hadn’t left our seats at halftime, I’m sure Ben would have signed the shoe like he did for the kid and dad sitting next to us…

I don’t know what is next for my son. At 6-months old, Jackson Browne picked him up at a concert and now at 6-years old, Ben gave him a shoe!

Thank you again Ben, from the bottom of our hearts!

Have a great season; Super Bowl #3 is coming soon! I’ve been a fan for a long time and I’m convinced Ben will be the first quarterback to win five Super Bowls.

You can see a larger version of Teddy with his new shoe, and one of father and son at the game here.

*Thank you so much to both Rich and Teddy!


You can read the statement from Steelers’ President Art Rooney II here.


Ben to work out in Pittsburgh…

Ben did an interview with Scott Brown of the Pittsburgh Tribune-Review today and talked about his intention to work out with quarterbacks coach George Whitfield Jr. in Pittsburgh while he is suspended and possibly do some coaching at the high school level.

In addition to bringing in the California-based Whitfield — the two have worked together during past offseasons — Roethlisberger said he will train with wide receivers that have been cut by NFL teams and want to stay in football shape.

“I am going to be doing a lot of drills, a lot of drops,” Roethlisberger said. “I will do everything humanly possible that I can do to stay as sharp as I can with the things I am allowed to do.”

You can also check out a video interview with Ben on the Steelers official site here.

Sports Illustrated’s 2010 NFL Preview issue hits newstands on Thursday (September 2nd) and senior writer Peter King has predicted that the Steelers will not only go to Super Bowl XLV, but they will beat the Green Bay Packers, 33-27 for their 7th Lombardi.